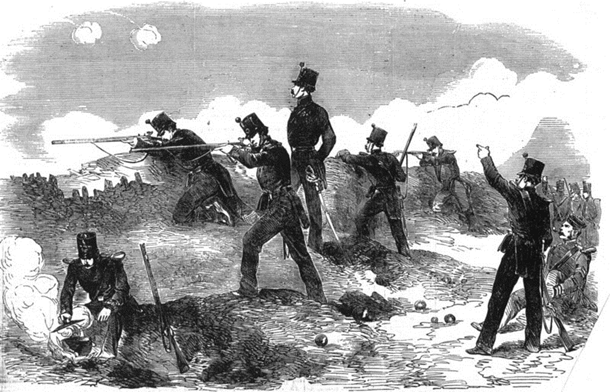 In the first of the Crimean talks on Tuesday 25 September (given by BRLSI Director Dr Steve Wharton) we will learn how Alexis Soyer (the Jamie Oliver of his day) invented the army field kitchen and joined the troops in the Crimea, at his own expense, to advise the army on improve the food for the British soldiers. A copy of Soyer’s book A Culinary Campaign is displayed in the exhibition.
On Thursday 27 September, Peter Smithurst (Curator Emeritus of the Royal Armouries, Leeds) is certain to give us a fascinating lecture on how the Crimean War, often considered to be one of the first ‘modern’ wars, introduced technical changes which affected the future course of warfare. It inspired a revolution in artillery design and construction, and introduced a revolutionary way of arms procurement and manufacture, which laid the foundation of the consumer society. It was one of the first wars to use the railways tactically; and the innovative use of the electric telegraph ensured that messages were relayed back and forth within a matter of days. This was also the first time the public could keep well-informed of the realities of war, and it was one of the first wars to be extensively documented through the written reports of William Russell for The Times newspaper, and through the haunting field photographs of Roger Fenton.  Medical hygiene and surgery also benefited from lessons learnt in the Crimea (it provided one surgeon with the knowledge to help save women’s lives).
Marie-Louise Luxemburg