The Strawberry Bank Lagerstätte preserves diverse species from an early Jurassic marine ecosystem in extraordinary three dimensional detail. 183 million years old, these animals lived and died at the peak of what geologists call the Toarcian Oceanic Anoxic crisis (T-OAC), a worldwide period of decreased oxygen saturation in the oceans which led to an increased rate of extinction and marked changes in the fauna of the oceans. 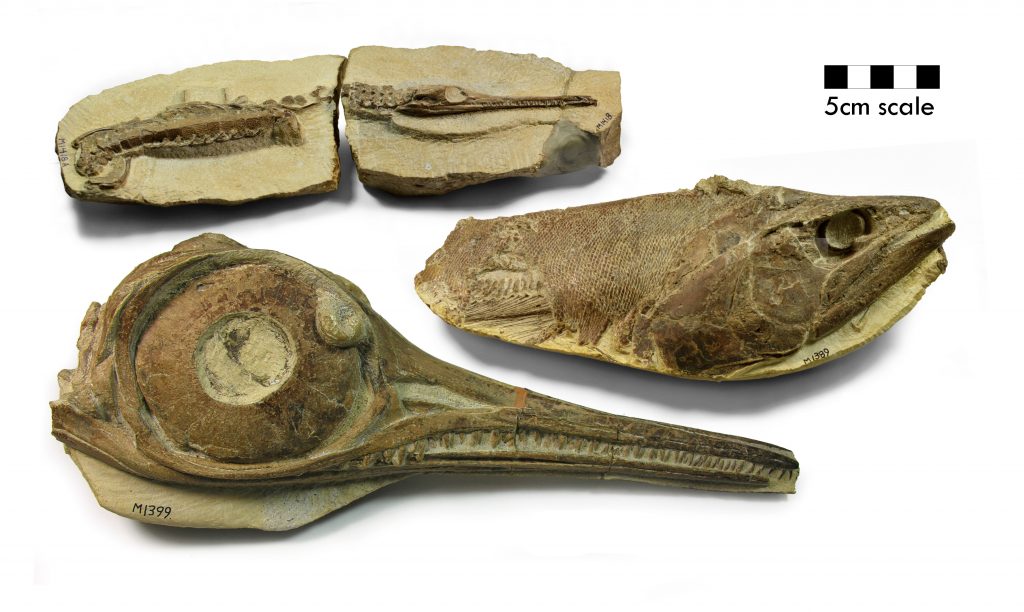 On this page you will find an overview of the Strawberry Bank Lagerstätte, its history, and the work Bath Royal LSI has been engaged in with these astounding fossils during the 21st century.

You will also find links to further resources about Strawberry Bank and Charles Moore.

In the mid-1840s Somerset Geologist Charles Moore discovered remarkable fossil bearing strata near to his home town of Ilminster. Moore built up a substantial collection of specimens from what he called his ‘saurian, fish, and insect bed’. Since 1854 Moore’s unique collection has been preserved at Bath Royal Literary and Scientific Institution. Working with in partnership with palaeontologists from University of Bristol, Bath Royal LSI have undertaken a programme of intensive study into the site we now call the Strawberry Bank Lagerstätte.

The term lagerstätte, German in origin and literally meaning ‘storage place’, is used by palaeontologists to describe an assemblage of fossils with exceptional preservation. In the case of Strawberry Bank, the fossils were preserved rapidly within limestone concretions, before significant compaction of the sediment in which they became buried, resulting in the preservation of fine three dimensional structures and in some cases soft tissues which are usually not fossilised. Unlike many important fossil sites of Toarcian age, which preserve similar creatures but crushed flat by the weight of accruing sediments, many of the fossils at Strawberry Bank allow us to study the orientation and structure of elements within the skeleton of certain marine vertebrates, especially ichthyosaurs of two species, Pelagosaurus crocodiles, and Pachycormus fishes. Additionally, fossils from the site include a variety of invertebrates including squid and octopus like cephalopods, lobster like arthropods, and terrestrial insects of nine different orders.

Since 2004 BRLSI has been facilitating palaeontologists to study the Strawberry Bank Lagerstätte. In 2010, our collections manager Matt Williams and Professor Michael J. Benton, of University of Bristol’s Palaeobiology Research Group, conceived of a project called the Jurassic Ecosystem of Strawberry Bank Ilminster (JESBI) in order to conserve, prepare, and research these amazing fossils. Our work was generously funded by the Esmée Fairbairn Foundation.

Many of the fossils needed to have rock removed from around them and a specialist conservator, known as a fossil preparator, called Lorie Barber, worked on over 50 specimens to reveal unseen details of their anatomy.

The insect specimens, missing from the Moore collection, were rediscovered in the collection of the Somersetshire Archaeological and Natural History Society. Cared for, but unexamined since donation in 1905, we curated this sub-collection of Moore’s fossils at the South West Heritage Centre in Taunton, which were still wrapped in 19th Century newspapers. These specimens included more than a thousand small specimens from Strawberry Bank, including 9 orders of insects.

Research into the crocodiles, ichthyosaurs, fish, insects, and the environment in which the fossils were preserved is helped us to build up a detailed picture of the ecosystem of Strawberry bank, 183 million years ago. In 2014 we celebrated these discoveries in an exhibition called Jurassic Ark, in 2015 an overview of our findings related to the Strawberry Bank Lagerstätte was 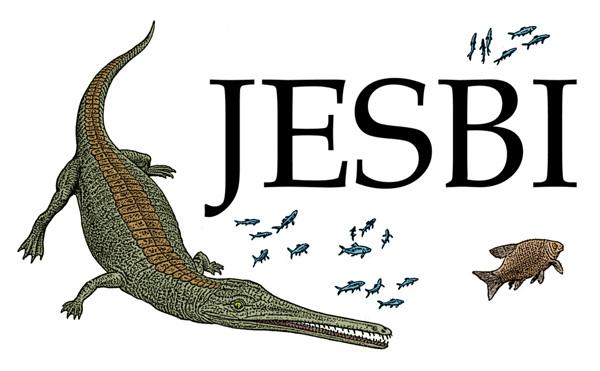 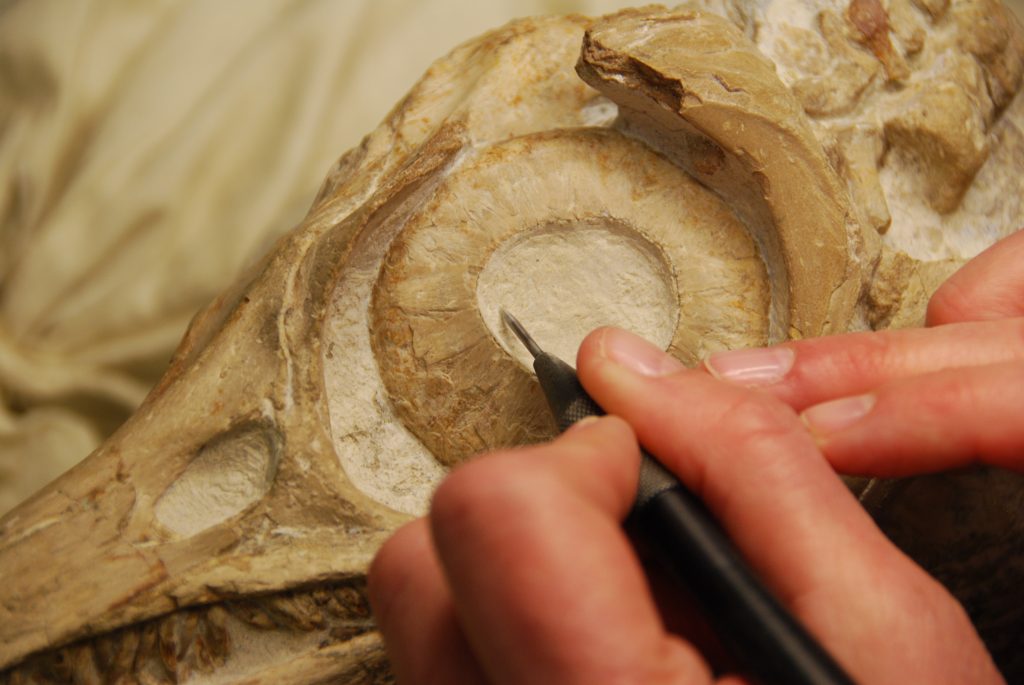 Micro Computed Tomography scanning, using X-rays to create serial cross-sectional images, is enabling us to examine the internal anatomy of skeletons preserved in three dimensions, leading to fresh interpretation of organisms. In 2015 Professor Michael Benton at University of Bristol received £240k from the Leverhulme Trust to use this technology to study Strawberry Bank fossils.

In 2019 our Collections Manager, Matt Williams, co-directed an excavation at Strawberry Bank with Dr Andy King, sponsored by his company Geckoella Ltd and supported by grants from the Geologists Association. This dig established key facts about the stratigraphic and geographic position of the Strawberry Bank strata and collected extensive samples which we hope will allow us to study the geochemistry and marine invertebrate ecology, as well as searching for further micro-vertebrates and insects.

Charles Moore called this site his ‘saurian, fish, and insect bed’ and these are, indeed, the predominant fauna of what is now known as the Strawberry Bank Lagerstätte.

Please click on the following links to find descriptions, images, and links to academic publications  concerning the following animals preserved at Strawberry Bank:

During 2022 we will be adding further pages describing the rest of the fauna. In the meantime you can find an academic review of the fossils here:

An overview of the site, its geological setting, and its palaeontological contents and significance, by Matt Williams, Michael J. Benton, and Andrew Ross, published in 2015 (free to access).

Description of a type of decapod crustacean, including specimens from the Strawberry Bank Lagerstätte, by Dennis Audo, Sylvain Charbonnier, and Matt Williams, published in The Journal of Systematic Palaeontology, 2016 (limited access / pay-wall).

Ichthyosauria from the Upper Lias of Strawberry Bank, England

A detailed description of the icthyosaurs from the sight, by Hannah Caine and Michael J. Benton, published in Palaeontology in 2011 (free to access).

A detailed description of the thalattosuchian crocodyliform from the site, by Stephanie E. Pierceand Michael J. Benton, published in the Journal of Vertebrate Paleontology, 2006 (limited access / pay-wall). 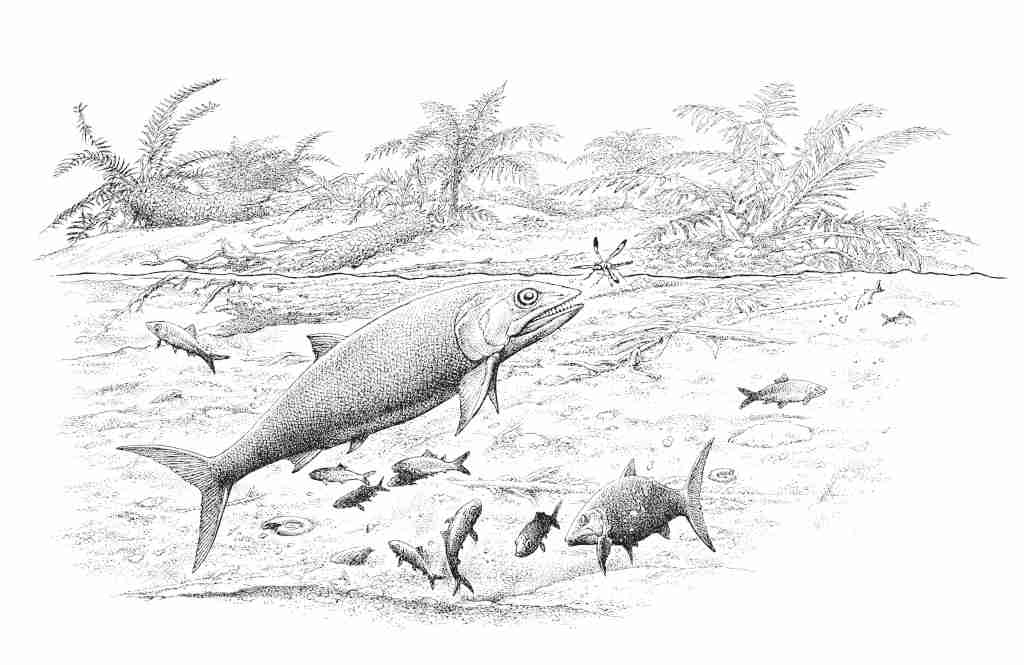 On the northwest margins of the great Tethys Ocean, 183 million years ago in the Lower Jurassic, sub-tropical islands rise out of a broad shallow sea.

A lagoon on the fringes of one such island teems with life. An early summer storm has brought down several of the grand Cycad trees that form the canopy of the lush vegetation covering the island.

The branches and roots of one such tree now provide shelter for schools of small Leptolepis, fish that feed on the tiny shrimps and other invertebrates swimming in the water and burrowing in the mud.

Pachycormus, fast swimming predatory fish, often work in teams to shoal up Leptolepis before picking them off, but in summer the opportunities for an easy meal are diverse. An exhausted damselfly has become caught on the still surface of the water, and its struggles have led one Pachycormus to abandon chasing quicker prey.

Shells of the ammonite Harpoceras falciferum litter the sea floor, perhaps the first victims of hypoxia (reduced oxygen levels) that sometimes affect lagoons such as this. 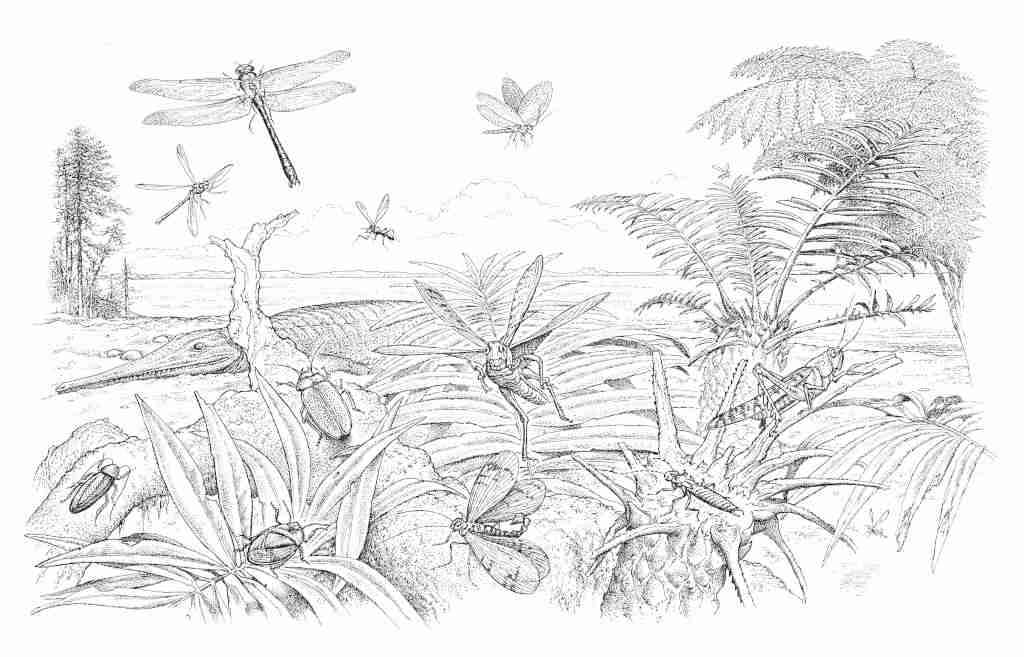 The dense vegetation of our island provides a habitat for a rich insect fauna.

The forest canopy is dominated by conifers, many of which we would recognise today, along with ginkgoes, tree ferns, and cycads.

The adult Pelagosaurus crocodile, basking on the shore, is no threat to these insects, though should they stray within reach of her babies, it will be their last mistake.

Dragonflies and damselflies are the top predators here, having superb eyesight and great speed. In their larval stage they would ambush other invertebrates and even small fish in the pools and streams where they grew, and can now take smaller winged insects in flight.

The crane flies, scorpion flies, and lacewings have both predatory and pollen feeding representatives. The bugs mostly use their sucking and piercing mouth parts to feed on plant sap, though some here may be specialized predators and devour the soft larvae of other insects.

Other threats to the vegetation of our island are the grasshoppers, crickets, and locusts. In the undergrowth beetles and cockroaches scuttle around. Along with the earwigs, cockroaches are detritivores for the most part, recycling dead plant and animal matter with equal enthusiasm. 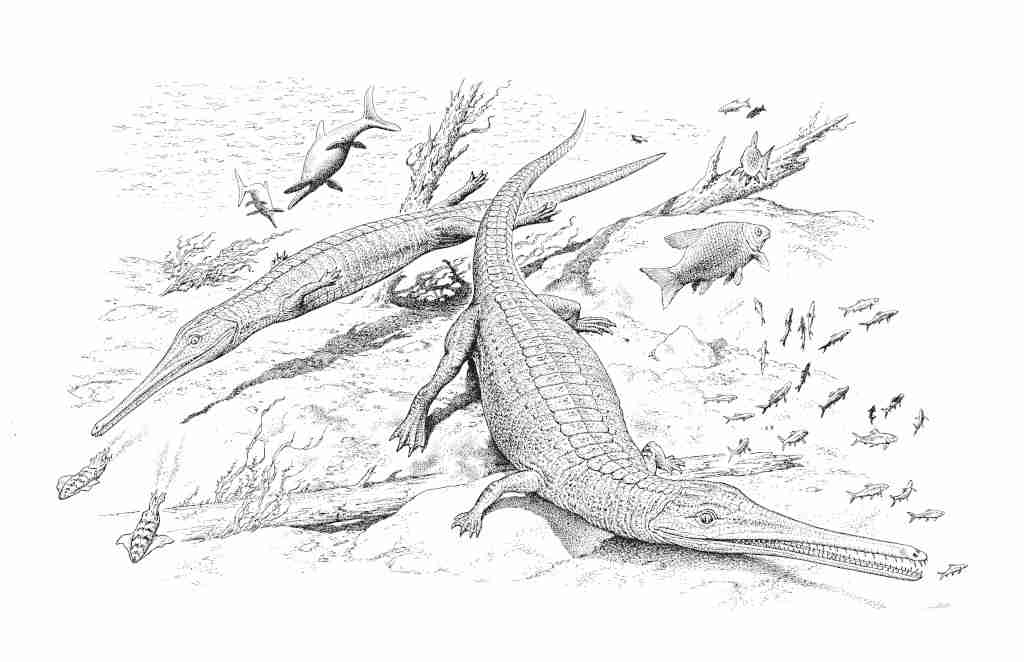 These Pelagosaurus crocodiles are agile swimmers, totally at home in the island lagoon. They are not as robust as some of their contemporary cousins, avoiding the open sea when they can.

The Geoteuthis squid take no chances and flee these graceful predators, as might any tiny juvenile Pelagosaurus, but neither are their target prey.

Cruising around they search for shoals of small fish. Pelagosaurus is capable of short bursts of ferocious speed and with a fast sideways sweep of their heads they snatch fleeing prey in their slender jaws. For a Leptolepis, there is no escape from these close-packed and backwards-curving teeth.

With the squid disturbed, the Ichthyosaurs move off in search of other hunting grounds. They are much larger and quicker than the Pelagosaurus, but have no interest in competing.

The three ecological reconstructions above are the work of illustrator John Sibbick, commissioned by Bath Royal Literary and Scientific Institution for the exhibition Jurassic Ark, displayed at the Institution in 2014 and again updated and revised in 2021. Much of the information on the Strawberry Bank Lagerstätte pages of this website come from that exhibition. You can find more of John Sibbick’s work here.