Leonard Jenyns and Charles Darwin- A Friendship Caught on Paper! The story behind one of four BRLSI Trails 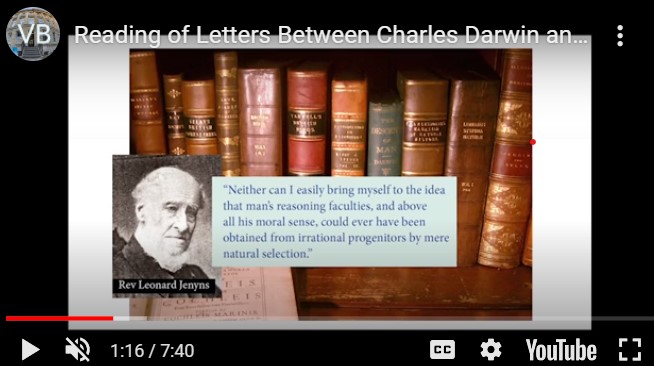 For those of you returning from your recent wander alongside the River Avon, your BRLSI Trail App in hand, you might rather enjoy this short film about the friendship between the Reverend Leonard Jenyns and a man who needs little introduction Charles Darwin. Two letters epitomise the debate that raged in the middle of the nineteenth century between those who embraced Darwin’s revolutionary theory of evolution and those who held to traditional religious beliefs. Charles Darwin sent a copy of ‘The Origin of Species’ to his friend, Bath clergyman and naturalist, Leonard Jenyns, just after the 1859 publication. It had been the culmination of over twenty years intense work for Darwin, but it was also just the beginning of a controversy with profound implications. Listen to a reading of the letters and discover the reason why Jenyns was resistant to Darwin’s ideas, and what Darwin said in reply. BRLSI Collections have a number of letters exchanged between Charles Darwin and Leonard Jenyns, over the course of their lifetime. Jenyns had been picked as a suitable naturalist to travel on the ‘Beagle’, but proposed his friend Darwin instead, with whom he had spent many hours beetle collecting in Cambridgeshire. When Darwin returned from the voyage he sought help from Jenyns in studying and writing up the report of the specimens of fish he had collected. The two men remained friends and corresponded about natural history for many years.
Enjoy the video and you might just find you want a second go along the riverbank!