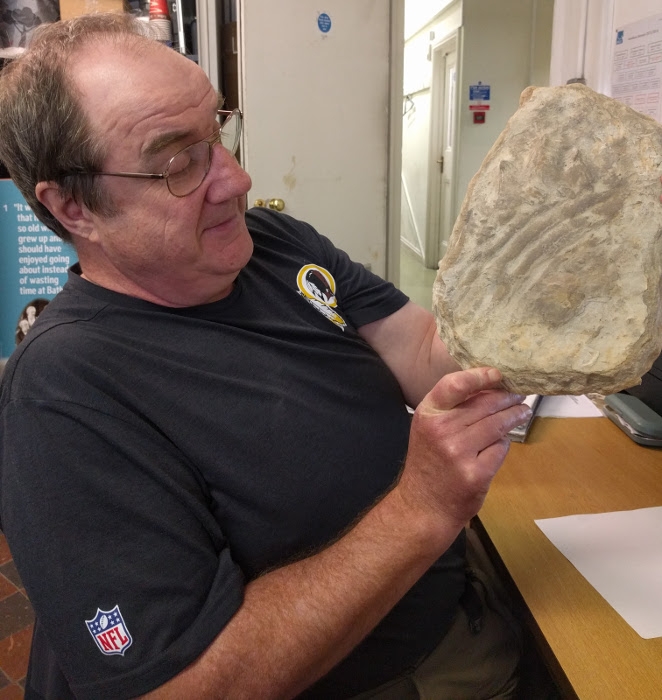 Recently our geological volunteer, Iain Brown, has been updating the documentation of parts of our fossil collection. Occasionally amongst these specimens we encounter a puzzle and a Chirotherium footprint proved to be just that. In solving the puzzle of this particular trace fossil we discovered it to be of greater historical important than had previously been suspected.
Chirotherium tracks were first found in the Triassic sandstones of German in 1834. The maker of these 243 million year old footprints remained enigmatic for many years, Chirotherium literally means ‘hand-beast’, however we are now fairly confident that they were produced by pseudosuchian archosaurs close relatives to the ancestors of crocodiles.
The historic label on the specimen is somewhat damaged and the name of the quarry partially obscured and hard to decipher, but the location name ‘Beddington’ is quite clear. The problem was, however, the only Beddington we could trace was in the London Borough of Sutton, far from any strata of the correct age.

A little research however revealed that a Chirotherium trackway was found in 1838 at Storeton Woods Quarry on the Wirral Peninsula, not far from the town of Bebington. This was the second discovery of this type of trace fossil, and the first in the UK.
So there we have it, a misspelling or miscommunication more than a century ago came back to haunt us, but thanks to the ease of modern research we were able to recover the specimen’s true origin. Only five other sections of this trackway are known, they are held in the Natural History Museum in London, World Museum Liverpool, Oxford University Natural History Museum, The Sedgwick Museum in Cambridge, and the Royal Geological Society of Cornwall.