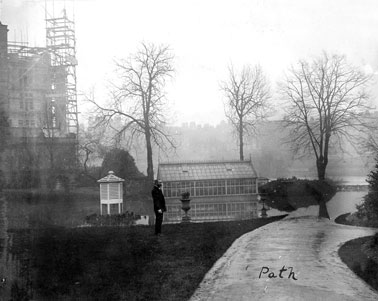 Many members will remember 2009 when BRLSI ran a year long programme celebrating Charles Darwin, which featured the exhibition, ‘Mr Darwin’s Fishes’, exploring Darwin’s friendship and working relationship with Leonard Jenyns, a naturalist and clergyman  associated with BRLSI for many years. He is perhaps not widely known but his significant contribution to natural history is gradually being recognised and now he is featured on two programmes, ‘Open Country’ on Radio 4 and ‘Country File’ on BBC1 (to be broadcast on Sunday 5 May at 17.00). On ‘Open Country’ he was hailed as ‘a supreme naturalist who spent 92 years of his life observing and recording natural phenomena’.

Jenyns lived in Bath for 43 years and made substantial donations of his books and the research notes to the BRLSI. In the Jenyns archives are many notebooks and manuscripts of his data, particularly his meteorological observations. He took weather readings twice daily and collected information about the seasonal variation of biological events – the dates of emergence of insects and plants in their annual cycle, now called phenology, and considered significant in the charting of global warming and climate change. The Open Country programme commented that ‘… his huge number of observations, both meteorological and natural history, provide modern phenologists with an extraordinarily rich stockpot of data to use and there is still a lot of work to be done on making best use of Jenyns’ data’. The BRLSI is fortunate indeed to hold so much of this valuable and unique resource; it would certainly benefit from more detailed study.
Jude Harris

The meteorological station in the garden of the BRLSI in Parade Gardens, built 1865 at Jenyns’s instigation

Some of Jenyns’s notebooks in the BRLSI Collections