How to Catch a Kangaroo 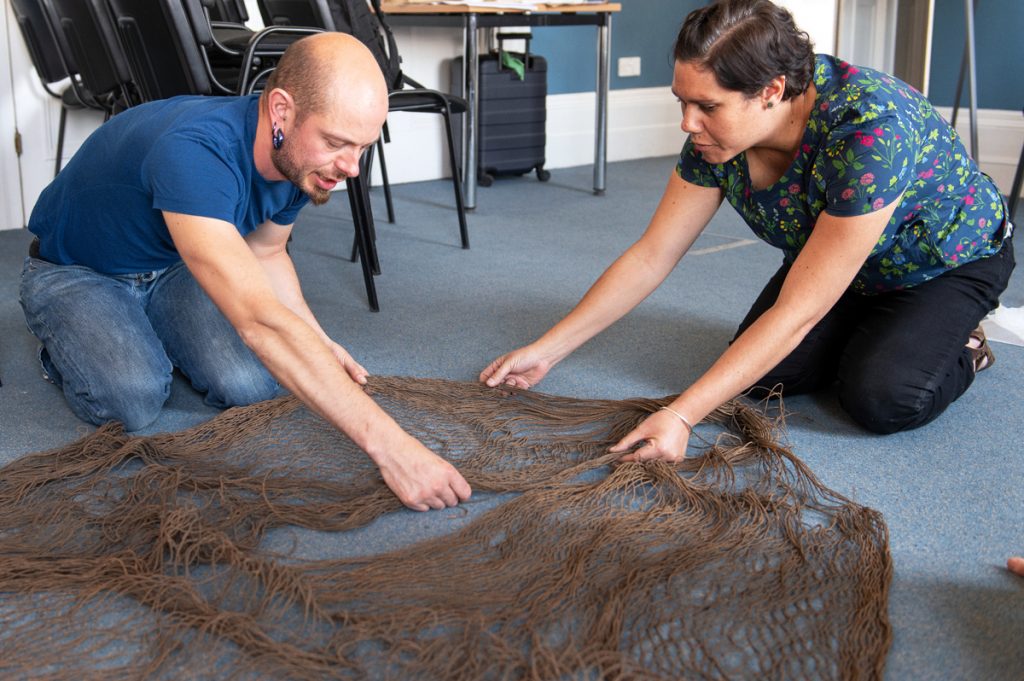 A large string net in the Bath Royal Literary and Scientific Institution’s Collection was closely inspected two years ago by our Collections Manager Matt Williams, Dr Jilda Andrews, Research Fellow, The Australian National University/National Museum of Australia, and Dr Gaye Sculthorpe, head of Oceania at the British Museum. Jilda and Gaye were researching string nets and bags made by the Indigenous Peoples of Australia, acquired by colonial travellers from the eighteenth century on and dispersed into museums throughout Britain. Many items rested in museum stores, receiving little attention, but now they are being researched and reassessed as significant cultural works, admired for their technical skill and the insight they offer into ancestral heritage.

Assumed from the label to be employed for catching kangaroos, our net is 3 metres long by 1.3 metres wide. But it poses a question: would it have had the strength to restrain a powerful animal like a kangaroo in motion? Unusually it is not knotted; instead the fine string opens up into a loose, flexible mesh when opened – like a hammock. And like a hammock, the threads at the ends of the net are drawn into a what resembles a half-hitch, according to Europa Dawson of the International Knotters Association who analysed the weave. This method of construction has not been recorded in any other Australian net. Is it possible the string was made by Aboriginal hands but modified by Europeans for the purpose of providing a comfortable night’s sleep on the long sea journey back from Australia? Or was it used specifically for the hunting of smaller game? Could it be a rare example of a knotting technique adopted only in a particular regional locality and never documented?

Untangling the complex histories of collections objects with only sparse, unreliable or absent records is difficult. The examination of the Bath Royal’s string nets by experts with specialist knowledge has not provided a single conclusive identification but raised further questions, as is so often the case with things in our collection.

If you want to read more, Jilda Andrew’s account appears in a chapter on ’String Ecologies’ in a recent comprehensive volume, ’Ancestors, artefacts, empire: Indigenous Australia in British and Irish Museums’, produced jointly by The British Museum and the National Museum Australia.