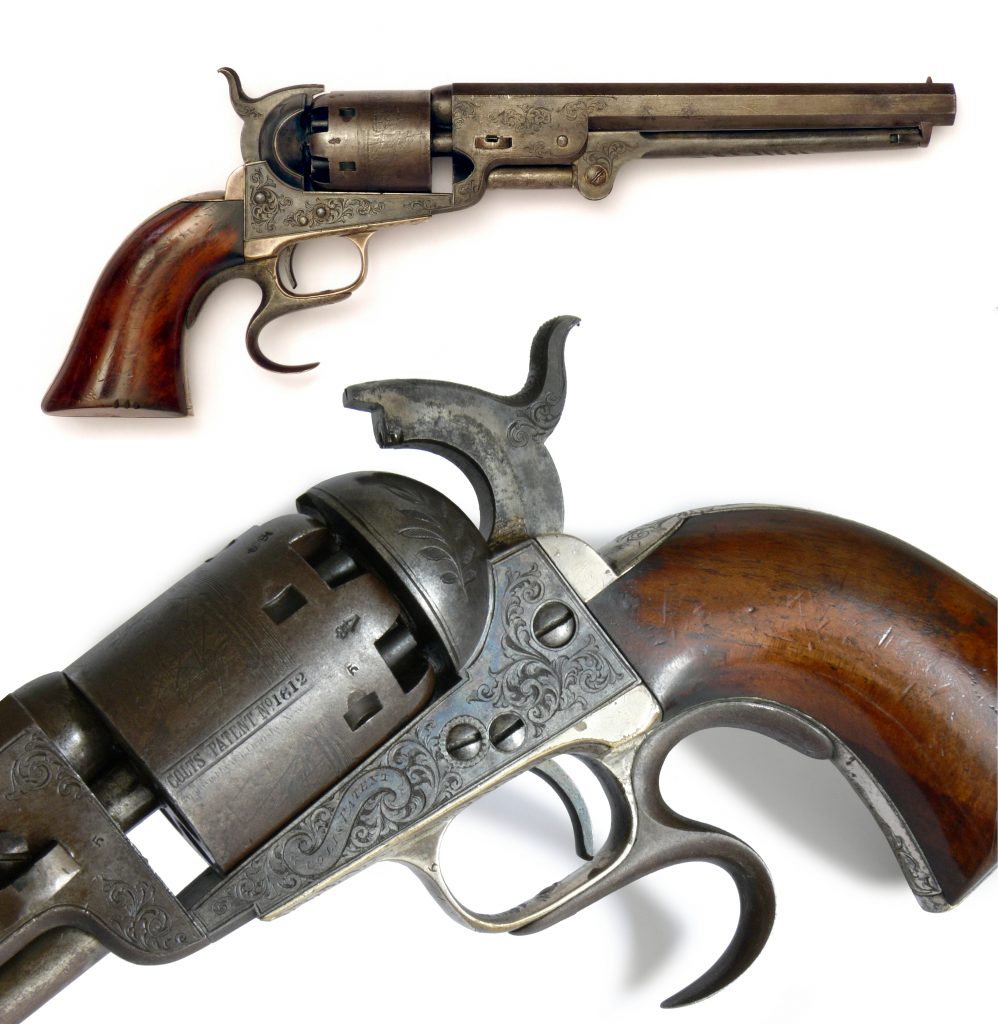 Our Collections Manager is currently preparing images and editing text for online exhibitions, with which to populate our new website, as well as for an international cultural platform to which Bath Royal Literary and Scientific Institution has been encouraged to contribute. This is a chance for him to revisit some of the finest objects Bath Royal has in its collections and share them with a wider audience.

This little pistol which is just put into my hand will pick into more than two hundred parts, every one of which parts is made by a machine. 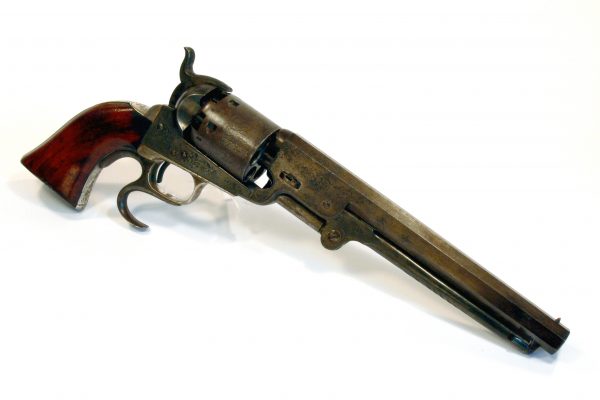 Brian Godwin, a longstanding Bath Royal volunteer and expert in historic firearms, has researched and written the following passage about our Colt revolver:

This 6-shot Colt Navy Model 1851 percussion revolver was made in 1853. Following a display at the 1851 Great Exhibition in London, Samuel Colt was overwhelmed by potential buyers eager to see and handle his revolvers. His success at the Exhibition led to the establishment of a factory in Pimlico, London, close to Vauxhall Bridge Road; there between 1853 and 1856, over 37,000 Colt Navy revolvers were produced, after which time the factory closed.

At a time when almost all English firearms were handmade, each component of a Colt pistol, including the wooden grip, was machine made and only the minimum of hand finishing was required. This guaranteed a precise fit and more importantly the achievement of interchangeable parts. The Board of Ordnance bought thousands of Colt Navy revolvers, many of which saw service both in the Crimea and India during the 1850s.

This revolver is factory engraved, which was available at the extra cost of £5 instead of £2. The low serial number, 1612, dates its year of manufacture to 1853, and it is a rare variant, with the backstrap slotted for the attachment of a shoulder stock and also fitted with a spur extension to the trigger guard.

Colt’s revolvers marked a revolution in small arms production and his London factory was a landmark in the advancement of mass manufacturing. This had a remarkable effect on consumerism and forged the way into the modern age. The accuracy of the machines guaranteed a perfectly functioning revolver, a precise fit for every piece and, more importantly, interchangeable parts.

Charles Dickens saw what a revolution Colt’s manufacturing process was and recorded his visit to the Colt factory in an article for his magazine “Household Words” of the 27th May 1854:

We are on the threshold of Colonel Colt’s factory, in the sombre and smoky region of Mill-bank. Under the roof of this low, brickbuilt, barrack-looking building, we are told that we may see what cannot be seen under one roof elsewhere in all England—the complete manufacture of a pistol, from dirty pieces of timber and rough bars of cast steel, till it is fit for the gunsmith’s case. To see the same thing in Birmingham and in other places where firearms are made almost entirely by hand labour, we should have to walk about a whole day, visiting many shops carrying on distinct branches of the manufacture; not to speak of the toolmakers, the little screw and pin makers; all of whose work is done here.

This little pistol which is just put into my hand will pick into more than two hundred parts, every one of which parts is made by a machine. A little skill is required in polishing the wood, in making cases, and in guiding the machines; but mere strength of muscle, which is so valuable in new societies, would find no market here —for the steam engine — indefatigably toiling in the hot, suffocating smell of rank oil, down in the little stone chamber below—performs nine-tenths of all the work that is done here. Neat, delicate-handed, little girls do the work that brawny smiths still do in other gun-shops.

Even the men have, with scarcely an exception, been hitherto ignorant of gunmaking. No recruiting sergeant ever brought a more miscellaneous group into the barrack-yard, to be drilled more rapidly to the same duty, than these two hundred hands have been. Carpenters, cabinet-makers, ex-policemen, butchers, cabmen, hatters, gas-fitters, porters, or, at least, one representative from each of those trades, are steadily drilling and boring at lathes all day in upper rooms.

What is commonly called piece-work is not the system usually adopted here. It has been found to tempt the men to hurry their work at the expense of a neat finish, and the manager prefers to give a workman six months’ trial, during which he learns his business of gun-making by machinery, and is also sure by that time to have shown what wages he is worth.

Girls quietly attending to the boring and rifling of the barrels —having nothing to do but to watch the lathe narrowly, and drop a little oil upon the borer with a feather now and then —men drilling cylinders, holding locks to steam files, cutting triggers, slotting screws, treating cold iron everywhere as if it was soft wood, to be cut to any shape, without straining a muscle.

The bores of barrels and cylinders must be mathematically straight, and every one of the many parts must be exactly a duplicate of another. No one part belongs, as a matter of course, to any other part of one pistol; but each piece may be taken at random from a heap, and fixed to and with the other pieces until a complete weapon is formed; that weapon being individualised by a number stamped upon many of its component parts. The advantage of these contrivances is obvious. In every case of revolvers are placed, when sold, a number of such parts of a pistol as are most liable to accident; and, with these, any soldier or sailor may, in a few minutes, repair his own weapon. Seventy-odd out of a hundred of the injured revolvers picked up on the battle-field during the Mexican war were repaired with bits of other pistols on the spot.

All this time we have been seeing only the making of little bits of a pistol. Pausing a moment, to see the engraving of a ship in full sail, and other ornamental work — including the maker’s name stamped by great pressure on the cylinder—we come into a great room, where all the minute portions are brought to be examined. Here, by means of gauges, but chiefly by the practised eye of the superintendent, each separate article is examined, and rejected if in the slightest degree faulty. From this room the various parts are served out to the workmen who put them together and turn out the complete revolver.

After a little practice, I find that a mere novice may, with one hand, discharge the six rounds as rapidly as the eye can wink.