We have important books and need your help!

Books printed in the 17th or 18th century have often been repaired or rebound in the past. Some are still in good condition and are regularly inspected and cleaned. Others require major or minor repair. A large number of these books were given to the Institution by Rev. Leonard Jenyns (1800-1893), who was an expert in the field of natural history. The nucleus of his library was originally formed by his great uncle Leonard Chappelow, and includes early works by well known figures such as John Evelyn, John Gerard, John Ray and Martin Lister. Jenyns collected books throughout his lifetime. His donation of about 3000 titles represents a major part of our library.

What do the books need?

While the contents of a book may be transcribed, photocopied and put on the internet, the visual and physical impact of seeing and feeling the book is a very strong one. We therefore feel the restoration of selected volumes to make them safe to handle is a worthwhile project.

Due to neglect in the past some books have suffered from storage in conditions that were too dry or damp. As can be seen, the boards and spines have become detached from the books and damaged. These volumes should be furbished and their corners repaired, endpapers replaced, and new leather spines attached where necessary.

How can you help? 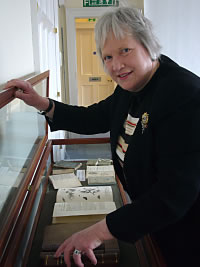 Any contribution towards either the full or part restoration of a book of your choice from the library will be gratefully acknowledged. When a book is adopted it will be restored by local bookbinders who specialise in antiquarian books. Your contribution will be recorded in our official register of the scheme, and your name will be inscribed on a specially designed bookplate. See below for a sample list of books currently awaiting restoration; a comprehensive list is available at the Institution.  For further details, or if you would like to inspect any of the books, please contact us via reception@brlsi.org or phone 01225 312084.

Dr. Evelyn Lewis, organiser of BRLSI’s Adopt-a-Book scheme (pictured left), also makes the registers that are used to record propgress. Photographs are taken of each volume before and after restoration and sponsors are invited to a book-signing, when the register and the restored book can be viewed and signed.

Sponsors may contribute all or part of the cost. The sponsorship is recorded for posterity by the signing of the appropriate bookplates affixed to the refurbished and record books and could prove to be a unique gift to record a special family event or even a Christmas present!

Books that have been adopted