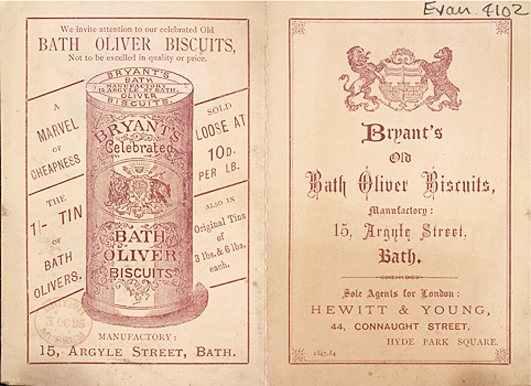 We are delighted to be opening our doors this Saturday 11 September (10am to 4pm) as part of Bath’s contribution to Heritage Open Days. This year’s theme is Edible England and we have a number of tasty events for you to join in with!

The Doctor, his biscuit and how the Bath Royal fits in

Visitors who flocked to take the waters of Bath in the 18th century typically breakfasted on a Bath bun, but its yeast-risen milk dough and sugary topping made it a rich choice for gouty invalids with a tendency to overeat, prone to the temptations of the sumptuous Georgian dinner table.

Dr William Oliver (1695–1764), one of the founding fathers of the Bath General Hospital, tussled with this problem. He also suffered from gout, observing that “It pricks, tears and rends the nervous membranes and tendons, and causes the most tormenting pangs”. Pondering his patients’ diet supposedly led to his invention, around 1750, of the Bath Oliver biscuit, a hard dry cracker to serve as a digestive aid for dyspeptic patients

Oliver became a hugely successful and wealthy physician, and was able to move into a newly built house designed by John Wood, in Queen Square, possibly in the same position as the current Bath Royal, though the original building was later replaced.

A brand is born

The biscuit, with Oliver’s portrait stamped on it for posterity, has survived over the centuries and is still a classic presence on the traditional cheeseboard. There was a brief flurry of panic when the biscuit was temporarily withdrawn from production during the recent pandemic (“A national tragedy, the last symbol of decency and old-fashioned values”… Daily Telegraph), indicative of how it has carved out a place in English culture as a symbol of traditional, reliable, and sometimes right leaning, values.

Whatever happens, the Bath Oliver will always be there

“…they were not, of course, allowed to act on Midsummer Night itself, but they went down after tea on Midsummer Eve, when the shadows were growing, and they took their supper—hard-boiled eggs, Bath Oliver biscuits, and salt in an envelope—with them. […] Everything else was a sort of thick, sleepy stillness smelling of meadow-sweet and dry grass.”

From ‘Puck of Pooks Hill’ by Rudyard Kipling, published 1906, a nostalgic evocation of Kipling’s Edwardian manor house in Sussex

“. . . and it would comfort him to see, each evening at dusk, Mrs. Driver appear at the head of the stairs and cross the passage carrying a tray for Aunt Sophy with Bath Oliver biscuits and the tall, cut glass decanter of Fine Old Pale Madeira.”

From ‘The Borrowers’ by Mary Norton, published 1952

“Two Bath Olivers, two Rich Tea, and two Digestive in every room. Replenished daily and changed three times a week. The Bath Olivers go to Mr. Bagot [the butler]—he has a Partiality for Them—and the others to the servants’ hall.”

M.J. Trow in his Inspector Lestrade novels (1990s), places Bath Olivers among the standard amenities of a country house bedroom in the 1930s. In this extract the house steward explains the rules to Inspector Appleby

“I began to feel rather hungry, and when Robert had gone back into the house I crept into the dining room through the long window and stole some biscuits from the sideboard. I had six of them. Bath Olivers. And then an apple as well. I had no idea I was so empty. I went and ate them in the woods, in case one of the servants should see me on the lawn from the windows, and then go and tell the cook that they did not think Mrs. de Winter cared for the food prepared in the kitchen, as they had just seen her filling herself with fruit and biscuits. The cook would be offended, and perhaps go to Mrs. Danvers.

Now that Maxim was safe in London, and I had eaten my biscuits, I felt very well and curiously happy.”

” We would sit, he and I, in the Painted Parlour with three bottles open on the table and three glasses before each of us; Sebastian had found a book on wine tasting, and we followed its instructions in detail. We warmed the glass slightly at a candle, filled a third of it, swirled the wine round, nursed it in our hands, held it to the light, breathed it, sipped it, filled our mouths with it and rolled it over the tongue, ringing it on the palate like a coin on a counter, tilted our heads back and let it trickle down the throat. Then we talked of it and nibbled Bath Oliver biscuits and passed on to another wine; then back to the first, then on to another, until all three were in circulation and the order of the glasses got confused and we fell out over which was which and we passed the glasses to and fro between us until there were six glasses some of them with mixed wines in them which we had filled from the wrong bottle, till we were obliged to start again with three clean glasses each, and the bottles were empty and our praise of them wilder and more exotic.”

From ‘Brideshead Revisited’ by Evelyn Waugh, 1945

“Men have witnessed the dinner ceremony on flagships, where the steward still called it ‘claret’ and a Bath Oliver appeared with the cheese. (Stilton? I suppose it must have been Stilton.)”

From Hugh Kenner’s ‘The Pound Era’, 1971, recording Ezra Pound’s memory in which he associated the Bath Oliver with a past world of manners.

The original Green St Bakery, set up by Oliver’s former coachman (who was said to have inherited the recipe from his employer) could claim to use the original recipe. The business was bought in 1869 and the product rebranded as ‘Original Bath Olivers’. From 1909 each biscuit had the doctor’s face imprinted on it. Huntley and Palmer acquired the business in 1962, followed by the American multi-national Nabisco, and United Biscuits.

And now make your own….

Half a teaspoon salt

Add half a cup of flour and mix till smooth.

Knead the dough until smooth, cover with cloth and leave 15 mins in a warm place.

Using a floured board, roll dough into a rectangle about 15mm thick.

With the rolling pin, press down all over the surface, fold over, roll out and repeat, for a few times.

Roll out as thinly as possible (no thicker than 7mm) and cut into circular shapes about 8cm diameter.

Place on oven tray and prick all over with a fork. Inscribe by hand the profile of William Oliver on each biscuit.

Bake 25 mins or until dough is brown and crisp.