Assessing the Plan of the Somersetshire Coal Canal 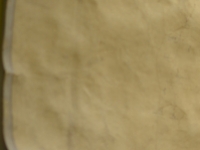 On 15th March 2012, paper conservator Moira Buick, our curator Matt Williams, and the chairman of the Collections sub-Committee Rob Randall, let down the Plan of the Somersetshire Coal Canal for the first time in perhaps as much as 40 years. This unique and intriguing manuscript map was produced from the survey for the planned canal by the famous William Smith (often dubbed the “Father of English Geology”).
The purpose of letting down the map, from its ceiling high wooden roller case, was to create a report on its condition and conservation requirements, so that a grant can be secured to repair, conserve, and make accessible this marvellous object. The linen backed map appears to have undergone some repairs in the 1960’s, but is in need of extensive work, though all the detail has survived very well.
The Somersetshire Coal Canal was constructed to link the coal pits of North Somerset to the Kennet and Avon Canal (canals being the primary distribution network of the day). Smith’s preliminary survey encouraged colliery proprietors from the Dunkerton and Radstock area to form the Somerset Canal Company in 1793 and on 17th April 1794 the Somerset Coal Canal received the Royal Assent, after Smith himself had given evidence before Parliament in its support. The following year Smith was appointed Resident Engineer on the project, but left the Company after an acrimonious disagreement four years later. The canal was completed in 1805.
Careful examination of watermarks in the paper reveal that this plan was drawn up in 1809 by Jeremiah Cruse, Smith’s one-time partner, once the Somersetshire Coal Canal was in operation. It was used as a working document in the offices of the Somersetshire Canal Company and there is evidence of amendments and additions made after its initial drafting.
2015 was the 200th anniversary of Smith’s publication of his map a “Delineation of the Strata of England and Wales with part of Scotland”, the first nationwide geological map. That year BRLSI asked members and visitors to select a suitable item from the collections for conservation. The coal canal map was selectd and a project is now underway to bring it back to its former glory.
You can find out much more about the Somersetshire Coal Canal by visiting the website of the Somersetshire Coal Canal Society.