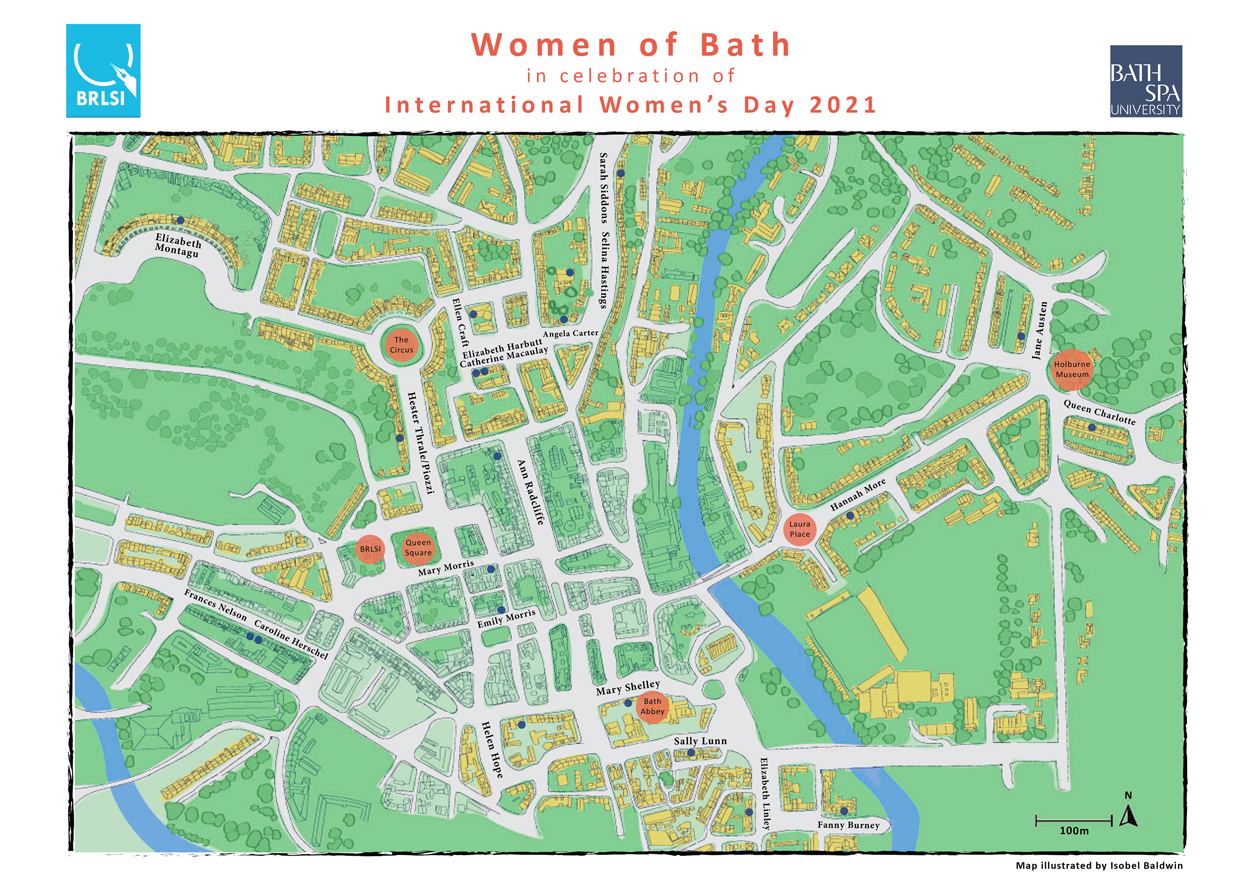 BRLSI are delighted to launch the Women’s Street Map of Bath -highlighting extraordinary women who have lived in the city of Bath. However this is only the first draft and if you think we have missed someone rather important then we would love to hear from you.  Don’t forget to tell #BRLSI why, via our social media channels or by emailing us on reception@brlsi.org
Bath is extraordinarily rich in terms of the number of famous people who have come as visitors, or lived and worked in the city.
It was a man who first proposed that Bath recognise notable men and women by erecting ‘mural tablets.’ Councillor Thomas Sturge Cotterell recommended 44 such plaques in 1898, and over the next 14 years a further 33 were installed. Counting the total number of plaques in Bath is a task full of difficulties but currently there about 80.
Out of these, only nine celebrated the contributions of women. Two have been added in the last few years, but clearly much work needs to be done to rectify the gender imbalance.
This trail includes women who currently have a plaque and women who are worthy of having one. There will be many others who deserve this recognition; if you have suggestions, please forward them to Betty Suchar at Bath Royal Literary and Scientific Institution.

1 Mary Wollstonecraft Godwin Shelley (1797–1851)
5 Abbey Churchyard
2018 was the 200th anniversary of the publication of Frankenstein, a novel she began writing before the age of 20, which has achieved worldwide recognition. A letter by Mary is proves she was writing the novel while living in Bath in 1816. She also studied painting and attended scientific lectures during her stay but left later that year, after marrying Percy Bysshe Shelley. Their residence was demolished in the 1890s to enlarge the Pump Room, but the floor and basement remain. A poster with information about Mary is on the wall inside, beside the entrance to the Pump Room. Her plaque on the railings outside was fittingly unveiled by historian and writer Sir Christopher Frayling in 2018.
Mary’s mother, Mary Wollstonecraft, an advocate of women’s rights, also spent time in Bath early in her life, whilst working as a lady’s companion.


2 Elizabeth Ann Linley (1754–1792)
1 Pierrepont Street (now Linley House) The plaque reads ‘Thomas Linley lived here and from this house his daughter Elizabeth eloped with Richard Brinsley Sheridan on the evening of 18th March 1772.’
As well as a beautiful singing voice, Elizabeth had striking features and was painted by Thomas Gainsborough and Sir Joshua Reynolds. Although the marriage was a stormy one, Elizabeth did her best to support Richard in his writing career and social advancement. However, he opposed her career as a singer in public concerts.
There is a further plaque at 11 Royal Crescent, the home of her musician father.

3 Fanny Burney (1752–1840)
14 South Parade
Fanny Burney is often credited as being the ‘mother of English fiction’. She was also a playwright and a diarist. Burney once observed that she liked Bath as it was a more affordable city than London, where it was necessary to maintain a carriage. In 1791 she lodged briefly in Queen Square and, as Mrs D’Arblay, lived with her husband and son at 23 Great Stanhope Street. She is buried in St. Swithin’s Church with her husband and son.

4 Hannah More (1745–1833)
76 Great Pulteney Street
Hannah More – poet, playwright, bluestocking and educational campaigner – was influential in education and active in the fight to abolish the slave trade. She argued that women were being denied a proper education and started a number of schools. Her various books sold exceptionally well.

5 Queen Charlotte (1744–1828)
93 Sydney Place
Queen Charlotte, the wife of George lll, was a patron of the arts and an amateur botanist, instrumental in the establishment of Kew Gardens. She visited Bath with her son, the then Duke of Clarence, in 1817.

6 Jane Austen (1775–1817)
4 Sydney Place
Unveiled on 14 September 1899, this was one of the earliest plaques installed, recognising Jane Austen, internationally renowned author of six major novels. She visited Bath several times during her life, staying at different addresses.
On her father’s retirement in 1801, the family lived at 4 Sydney Place until shortly before his death in 1805. Bath features in Persuasion and Northanger Abbey. More can be learned about her life and work at the Jane Austen Museum at 40 Gay Street. The Jane Austen Society is part of the BRLSI located at 16 Queen Square, where there are several Jane Austen related talks each year and an Austen archive.

7 Sarah Siddons (1755–1831)
33 the Paragon
Appropriately the famous actress, Mrs Ellen Terry, was asked to unveil the tablet for tragedienne Sarah Siddons, on 21 October 1922. Sarah performed at the Old Theatre Royal in Old Orchard Street from 1778 to 1782 and achieved much popular success at Drury Lane. As a celebrity she was painted by a number of artists, and was friendly with other well-known women like Fanny Burney and Hester Thrale.

9 Angela Carter (1940–1992)
5 Hay Hill
Angela Carter’s reputation continues to grow; as a British writer of magic realism and Gothic fiction, she has been celebrated in recent biographies and in numerous reviews and articles. She received widespread praise for her collection of fairy tales. She lived in Bath from 1972 to 1977 before relocating to London. Sir Christopher Frayling, her biographer and great advocate, is supporting the campaign to install a plaque for Carter.

10 Catharine Macaulay (1731–1791)
Alfred House, 14 Alfred Street
Some years after her husband died, Catherine Macaulay moved to Bath. In 1774 she lived first at 2 Alfred Street where she worked on her eight volume History of England. This popular history received attention for its republican sentiments. She was a champion of liberty and her stance was appreciated by a number of Americans, including George Washington, who invited her to visit Mount Vernon. Catherine profoundly influenced Mary Wollstonecraft who admired her ideas and her willingness to stand up for her beliefs.

11 Elizabeth Harbutt (1847–1930)
Hartley House 15 Alfred Street
Elizabeth was a portrait artist who exhibited at the Royal Academy of Art. In 1887 Queen Victoria commissioned a portrait of herself and Prince Albert. In 1876 Elizabeth married William Harbutt, Head of Bath School of Art, who later invented Plasticine in 1897.

12 Elizabeth Montagu (circa 1718–1800)
16 Royal Crescent
Elizabeth Montagu was called the ‘Queen of the Blues’ as a result of her literary salons in Bath and London from the mid-18th century on. Initially the lead was taken by a few privileged women who resented the lack of opportunity women had to develop their intellects and emphasised the importance of intelligent conversation, as opposed to the more prevalent entertainments of drinking, card playing and gambling. These salons encouraged women to write and to publish.
Richard Samuel painted a portrait of the Bluestockings, The Nine Living Muses of Great Britain, which includes Elizabeth Montagu and other prominent women. In the 1770s and 1780s the Bluestockings developed into a broader social and literary network and the term found its way into more general usage.

13 Ann Ford Thicknesse (1737–1824)
8 Royal Crescent
Ann Ford was a gifted linguist, singer and musician. A daring portrait by Gainsborough, made in 1760, shows the viola da gamba which she played. She sang in the Brock Street Chapel; Bath composer Venanzio Rauzzini said how much he admired her voice.
Ann married Philip Thicknesse, a controversial figure, and they travelled widely. She wrote several books expressing outspoken views, and received much criticism during her lifetime.

14 Adela Breton (1849–1923)
15 Camden Crescent
Adela Breton was an artist, archaeologist and traveller, known for her travels in Mesoamerica and her detailed watercolours of the Mayan temple murals. Her major work began after the death of her father in 1887 when she was nearly 40. She was a member of the Bath Royal Literary and Scientific Institution and donated to its collection. A booklet The Remarkable Miss Breton is available from BRLSI. Her work is to be found at the Victoria Art Gallery in Bath and at Bristol Museum. Her plaque, sponsored by Pascale Reymond, was unveiled on 19 July 2016.

15 Mrs Hester Thrale (later Mrs Piozzi) (1741–1821)
8 Gay Street
Hester Thrale was an author, diarist and patron of the arts. She married a wealthy brewer, Henry Thrale, in Soho in 1763 and they had 12 children. As prominent members of London literary society, they became close friends of Dr Samuel Johnson but eventually moved to Bath, where Henry died in 1781. Hester’s friendship with Dr Johnson ended after her marriage in 1784 to a young music teacher, Gabriele Piozzi, and they moved to a family estate in North Wales.

16 Ann Ward Radcliffe (1764–1823)
22 Milsom Street
A founder of Gothic fiction, Ann Ward lived in Bath where her father managed a Wedgwood china showroom in Westgate Buildings and later at 22 Milsom Street. In 1787 she married the Reverend William Radcliffe, the owner and editor of the English Chronicle, and moved to London. Her first novel, The Castles of Athlin and Dunbayne, was published in 1789. Jane Austen refers in Northanger Abbey to her later and very successful novel, The Mysteries of Udolpho.

17 Caroline Herschel (1750–1848)
Caroline Herschel was the first salaried woman scientist. She was initially a singer but through working with her brother William, became interested in astronomy and was eventually labelled ‘Hunter of Comets’. She published several books, and she and Mary Somerville became the first women to be given honorary membership of the Royal Astronomical Society in 1835. Her home in Bath is now the Herschel Museum.

18 Sarah Grand CBE (1854–1943)
7 Sion Hill Place
Sarah Grand was a writer with an international following who advocated greater independence and equality of opportunities for women. She introduced the term ‘New Woman’ to describe her female ideal, and was part of the early feminist and the later Suffragette movements. She lectured widely in the United States where her novel The Heavenly Twins was very popular. She served as Lady Mayoress in Bath from 1922 to 1929 with Mayor Cedric Chivers. A painting of her by Alfred Prago was given to the city in 1943 by her son. She is buried in Lansdown Cemetery.

19 Sarah Fielding (1710–1768)
Widcombe Lodge
Sarah Fielding made a living by writing. The Adventures of David Simple was published anonymously in 1744 and achieved considerable success. She was a pioneer in the field of children’s fiction, and The Governess, or The Little Female Academy was the first full-length novel written for children.
Sarah’s wealthy neighbour, Ralph Allen, encouraged her and gave her financial support. Her brother, the writer Henry Fielding, was a resident of Widcombe Lodge and a joint plaque mounted there was unveiled by Sir Arthur Conan Doyle in 1906.
Sarah is buried at Charlcombe Bath and there is a memorial plaque to her on the west porch of Bath Abbey.

A big thank you to Isabel Baldwin, a student at Bath Spa University, Jane Sparrow-Niang, Jude Harris and Gerie Herbert.
We hope to receive your nominations soon.

BETTY SUCHAR TELLS YOU MORE ABOUT THIS EXCITING PROJECT HERE!

How will you help BRLSI forge a gender equal world?Celebrate women’s achievement. Raise awareness against bias. Take action for equality. 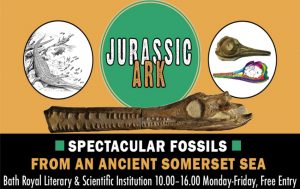