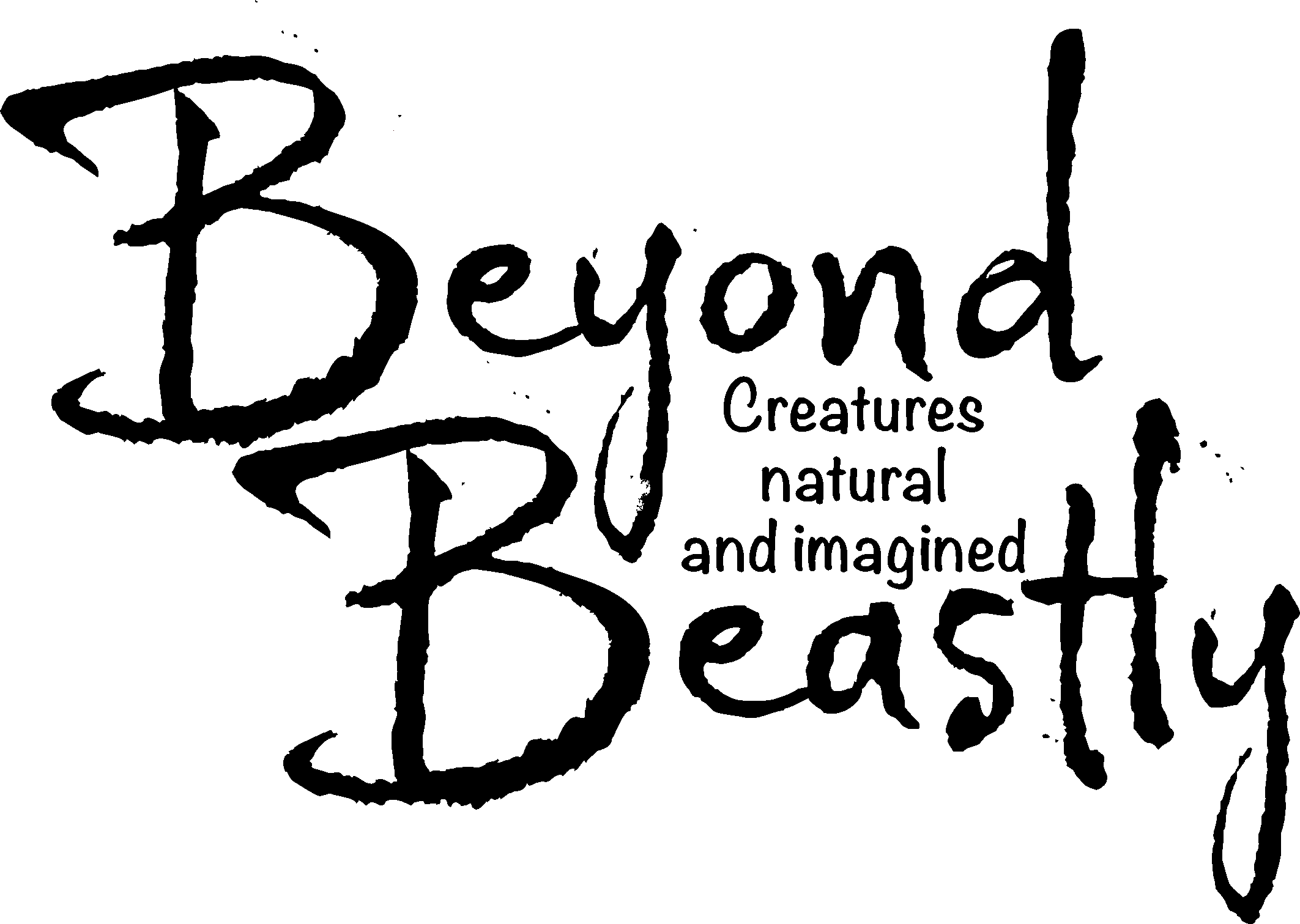 Beyond Beastly
creatures natural and imagined

Beyond Beastly is a place where you can encounter an array of the monstrous creatures of myth and legend and consider the deeper significance of their place in our psyche, both historically and today.

By the 17th century people began to question how real these strange monsters were. The rapid progression of science and the discovery of curious animals in distant continents saw a cognitive shift from a chaotic mythological world to a catalogued and ordered one. Though dragon has been supplanted by dinosaur, unicorn by rhinoceros, and sea monster by plesiosaur and giant squid, we still reach for monsters to fulfil the role of adversaries and warnings.

Such creatures were seriously feared at a time when the boundary between superstition and reality was blurred. Is it not the case that even now we seek to explore perceived and real threats through the medium of story and imagination?

The malevolent monsters of our myth and legends were archetypes of our feared predators, but also metaphors for overcoming perils and tempering our own destructive potential. 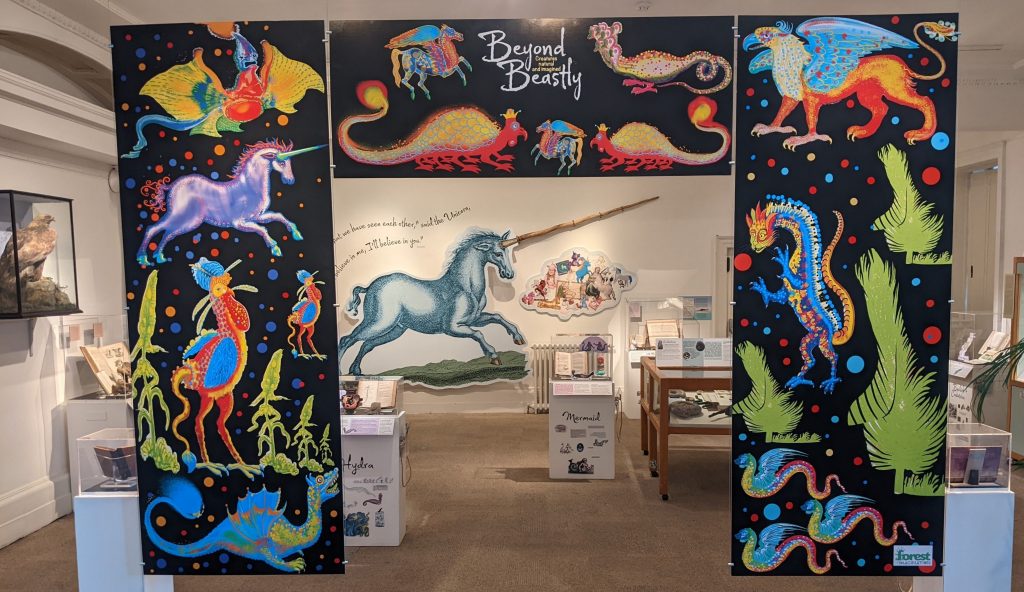 As of 16th November 2022 this page is a work in progress and will be updated live. Production of this online resource is currently at c.15%.

In the meantime, if you would like to visit a navigable, 3D, ‘Multiple Viewpoint Pano Tour’ of the exhibition as it appeared at the Bath Royal Literary and Scientific Institution please click here (created by BRLSI volunteer John Law and hosted on his own website).

What mythical beast can be warded off by carrying a weasel?

Is a unicorn different from a rhinoceros or a narwhal?

What did St Keyna do to the venomous snakes of Somerset 1600 years ago?

The world was an even more mysterious place a few hundred years ago. People really used to believe in unicorns and dragons.

Perhaps you would too if you heard stories about weird creatures from remote corners of the earth, before travel was easy and before most people could read, let alone watch YouTube! 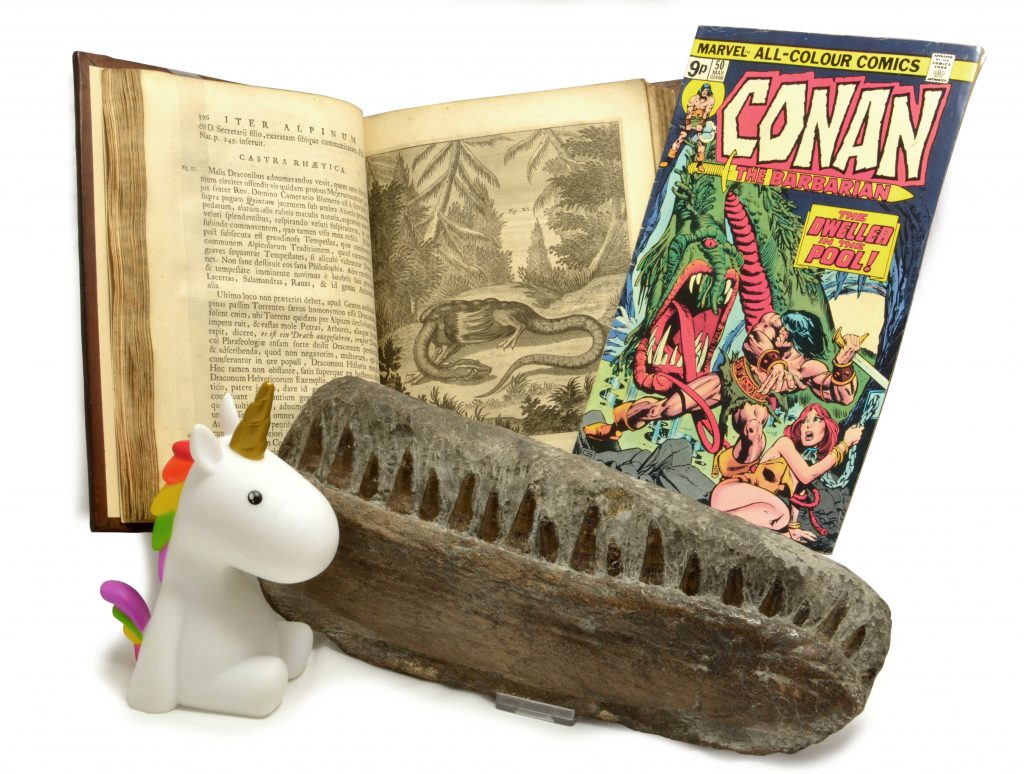 In 1612 Wolfgang Franz, a German theologian, wrote a book on animals focusing on their moral, aesthetic, and miraculous qualities.

He wanted to provide accurate information for religious preachers to use as examples in their sermons. Franz included comments on mythical creatures as well, and insisted the unicorn is a regularly occurring animal in nature – with reference to what he considered to be its Biblical description.
Other mythical creatures he describes are the behemoth, leviathan, sphinx, phoenix, griffin, harpy, mermaid, dragon and basilisk. 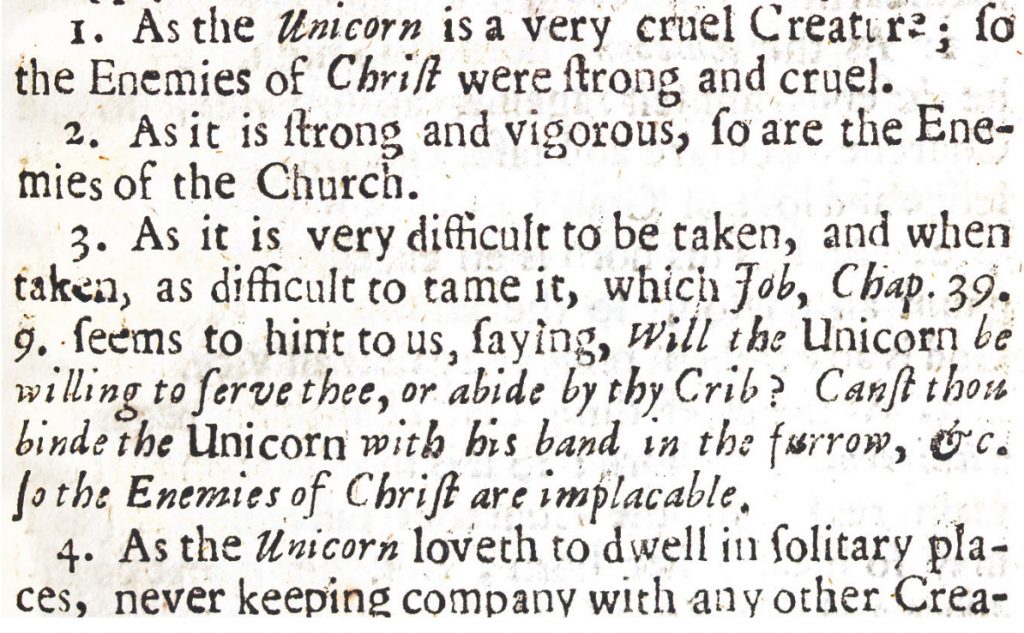 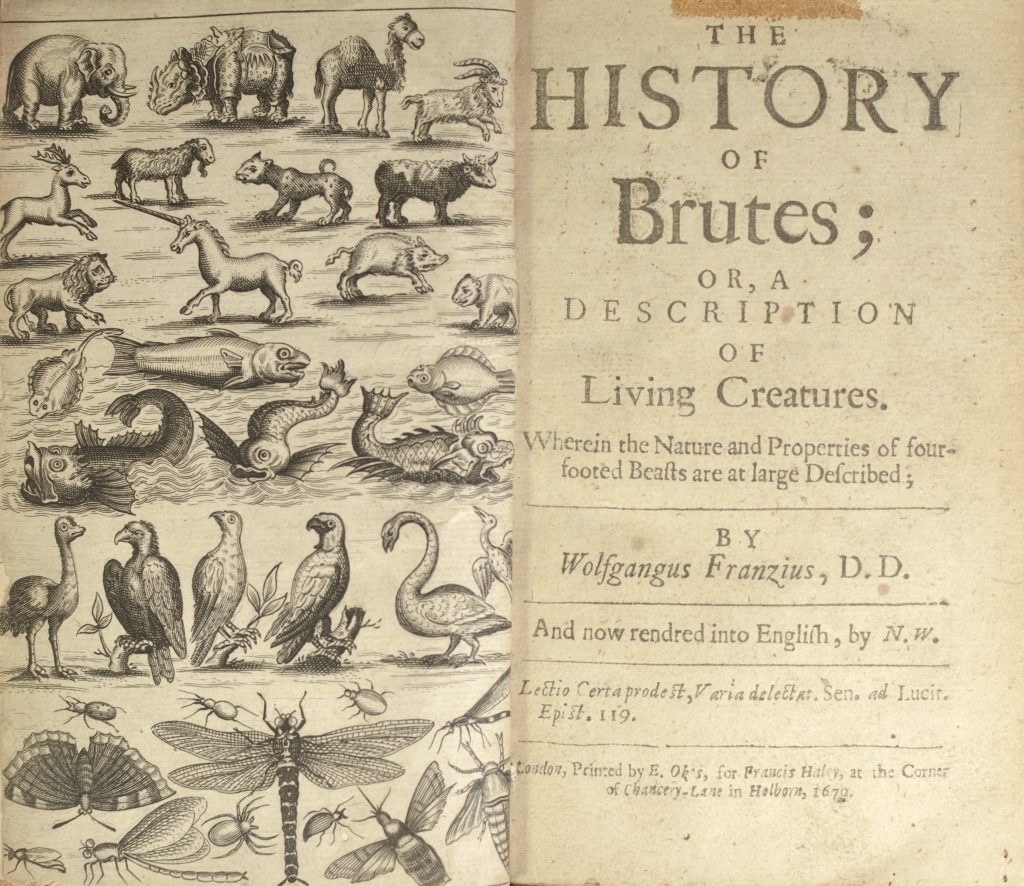 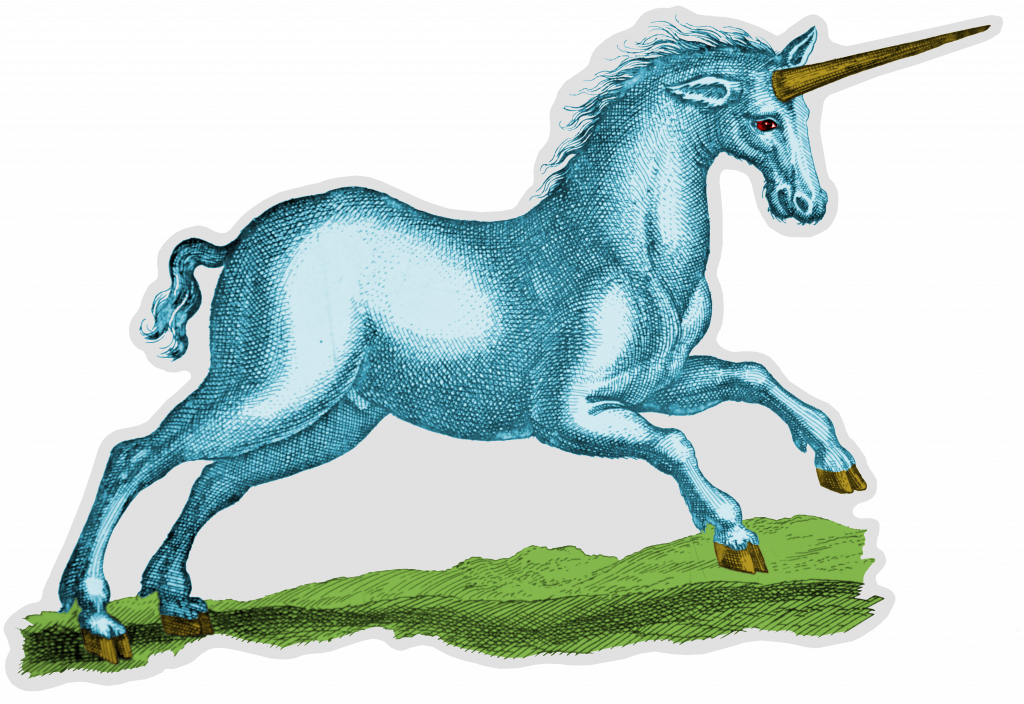 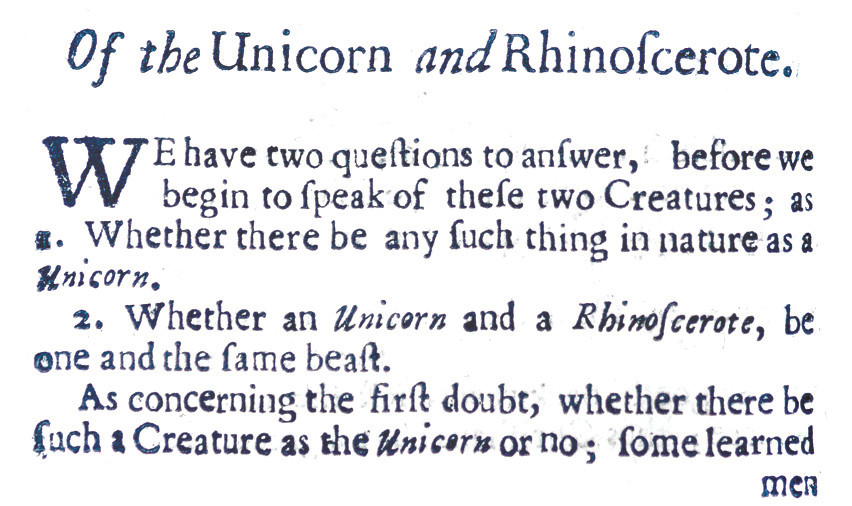 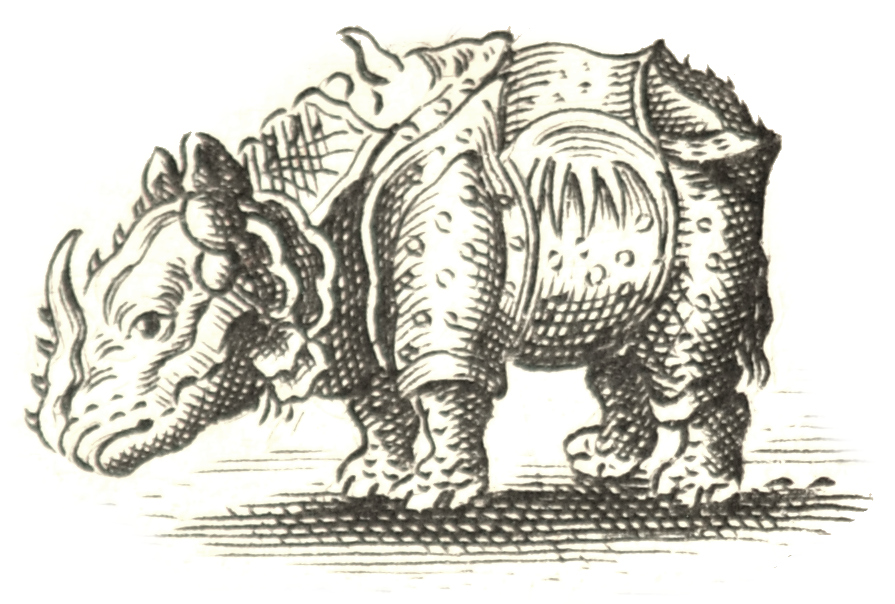 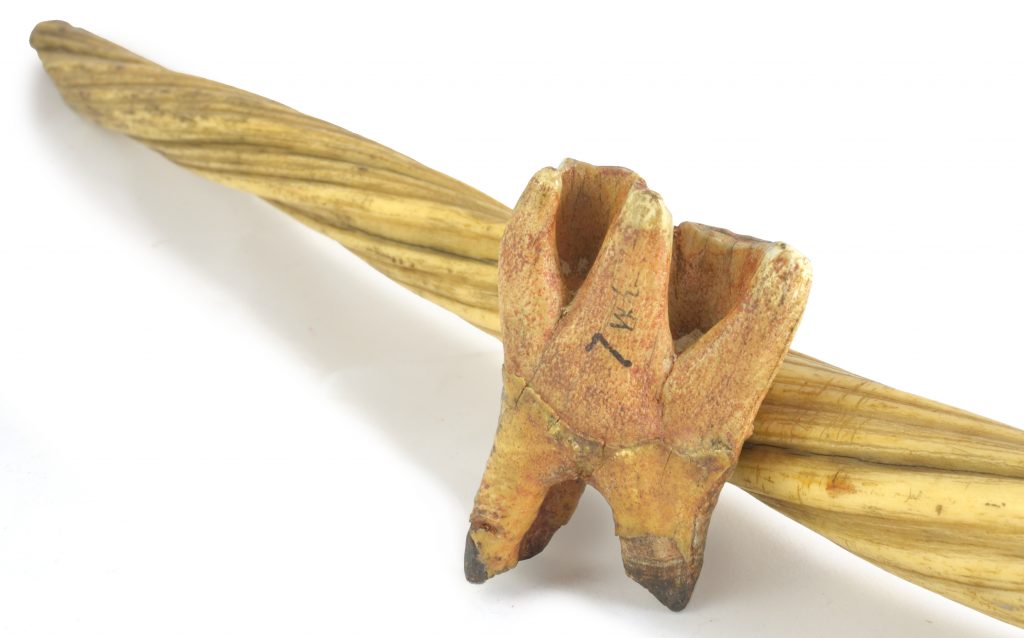 Confusion about the unicorn and its horn existed for centuries. As early explorers searched for the mythical unicorn, they encountered all kinds of possible candidates. Marco Polo, travelling through China, encountered a single-horned animal which he could only believe was a unicorn, although in fact it was an Asian rhino – and rather uglier than a unicorn was supposed to be.

By the 19th century it was understood that horns such as this one were actually tusks that came from the Narwhal, an arctic whale named Monodon monoceros (Linnaeus 1758) and that rhinoceroses were distinct creatures that included extinct ice age species. The woolly rhinoceros was one of the Pleistocene megafauna which walked into Britain across the ice-age steppe, when sea levels were much lower.

By the 19th century it was understood that seeming unicorn horns, such as this one, were actually tusks that came from the Narwhal, an arctic whale named Monodon monoceros (Linnaeus 1758) and that rhinoceroses were distinct creatures that included extinct ice age species. 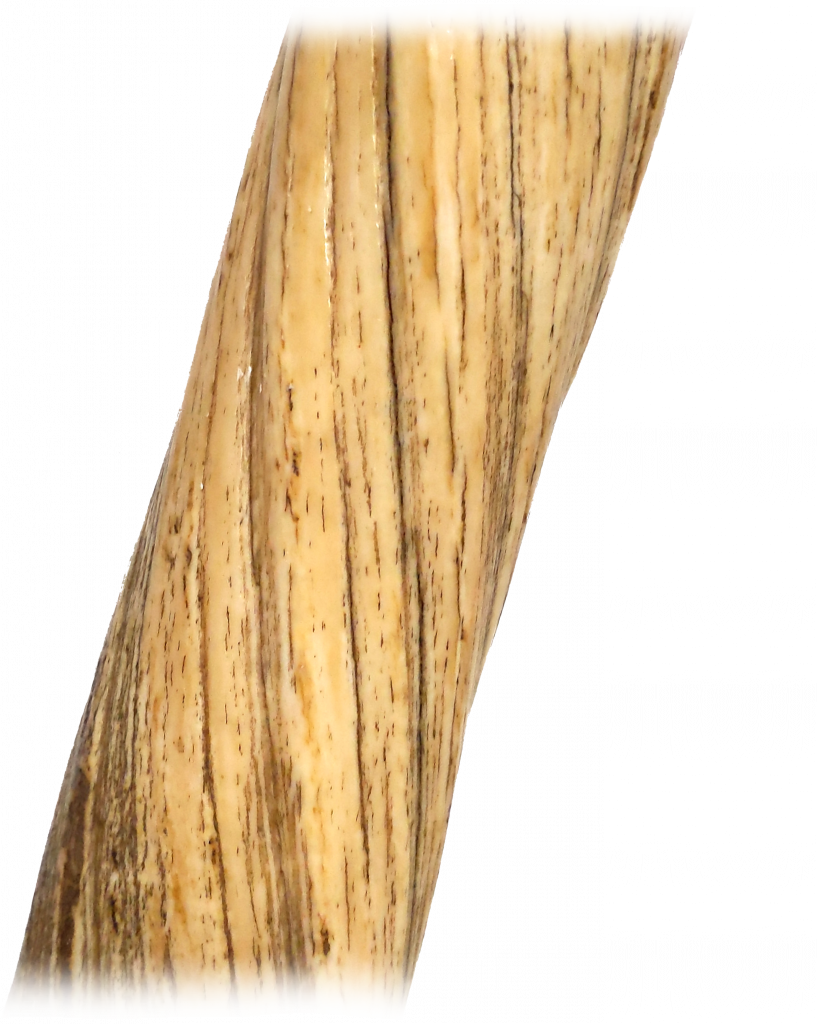 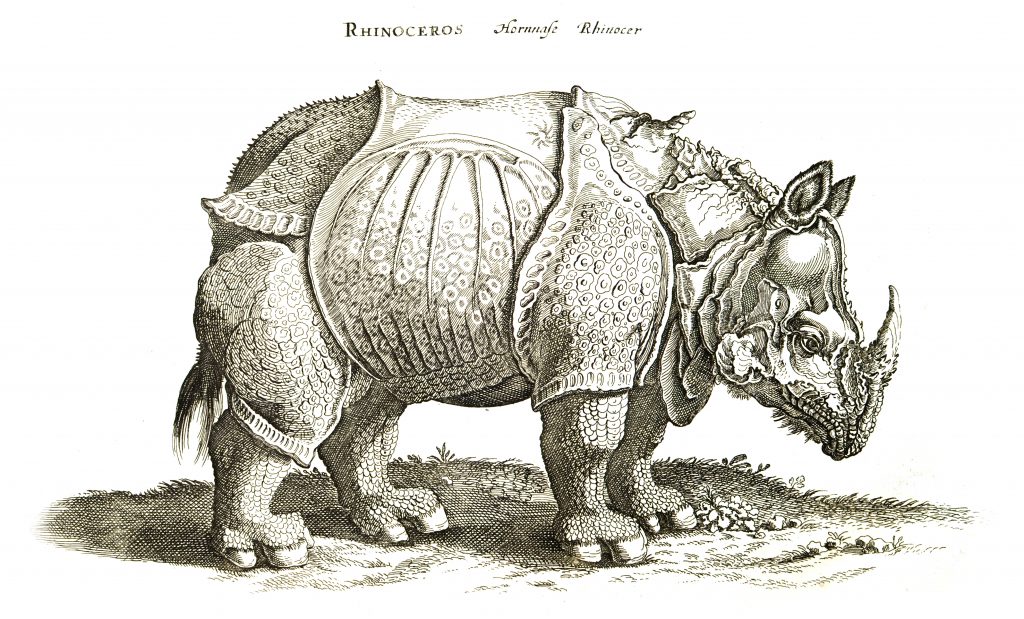 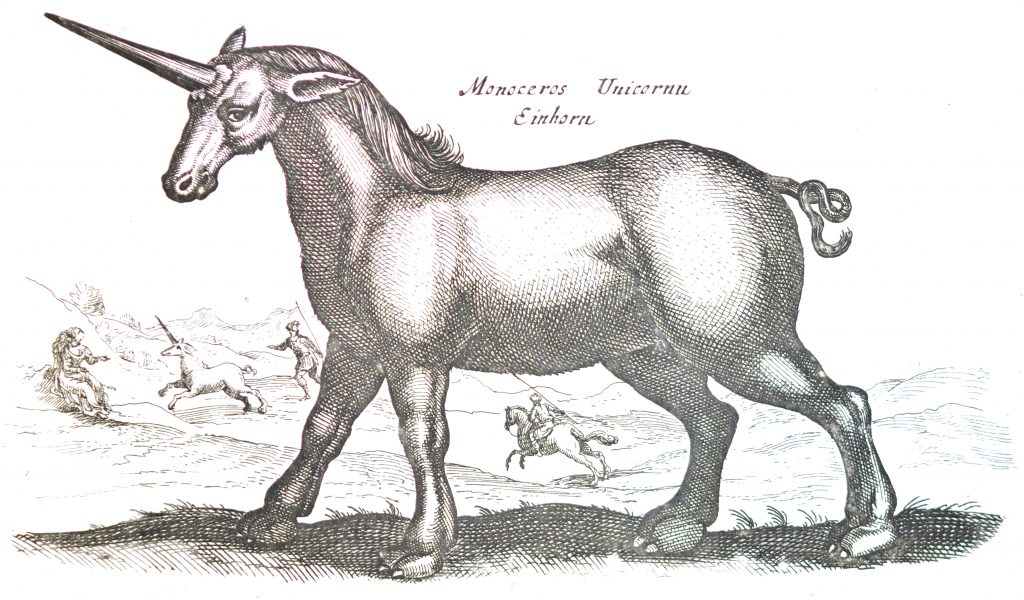 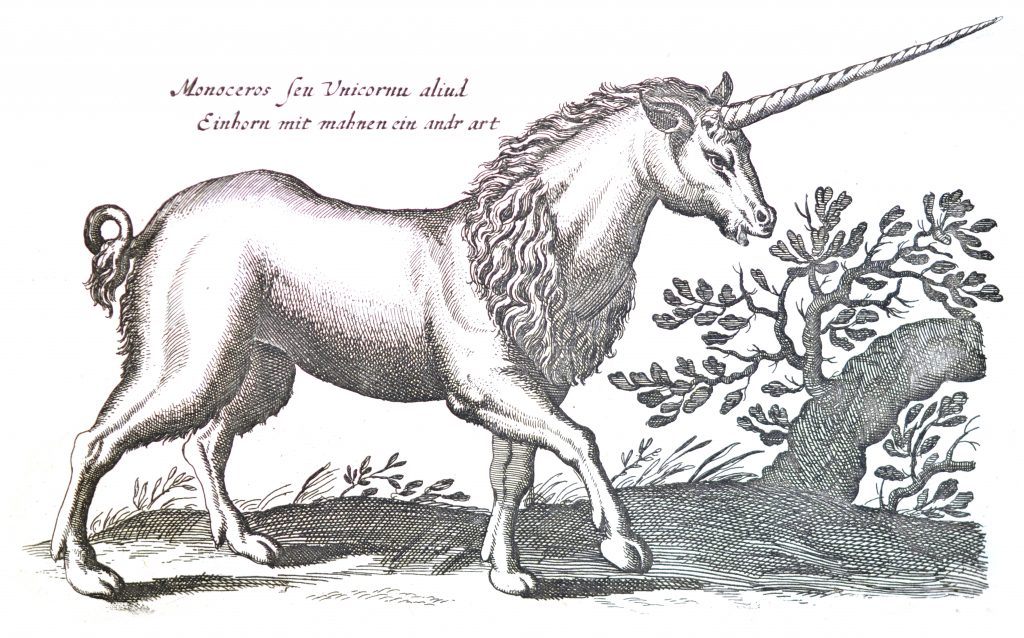 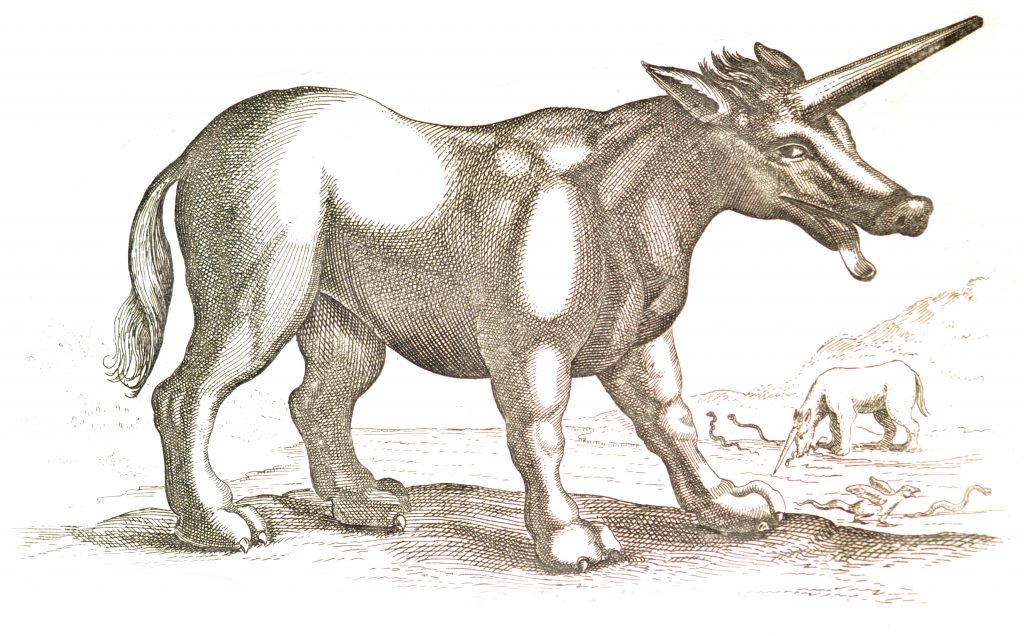 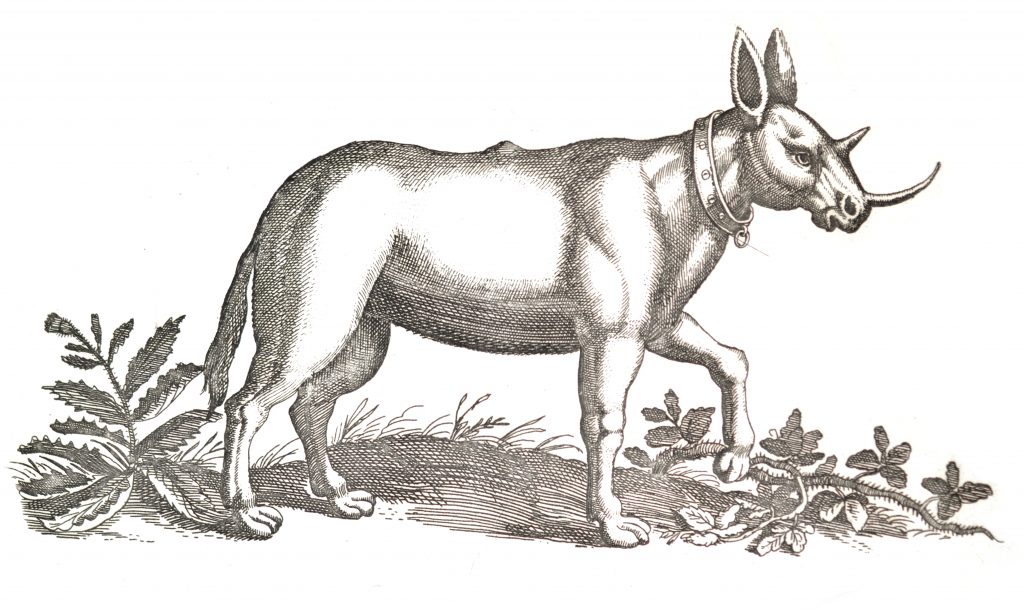 Albrecht Dürer’s  compelling woodcut of a rhinoceros was made in 1515. A spiral horn grows out of its back and seemingly it wears a suit of armour. This image influenced people’s idea of the creature for two and a half centuries and was much copied by other artists over the years, as seen here. Dürer had never set eyes on the real animal and based his drawing on a written description and someone else’s sketch.

Dürer’s rhino and and numerous unicorns are  depicted in ‘Historiae naturalis de quadrupedibus libri’ by Joannes Jonstonus,  with engravings by Mathias Merian, 1657. 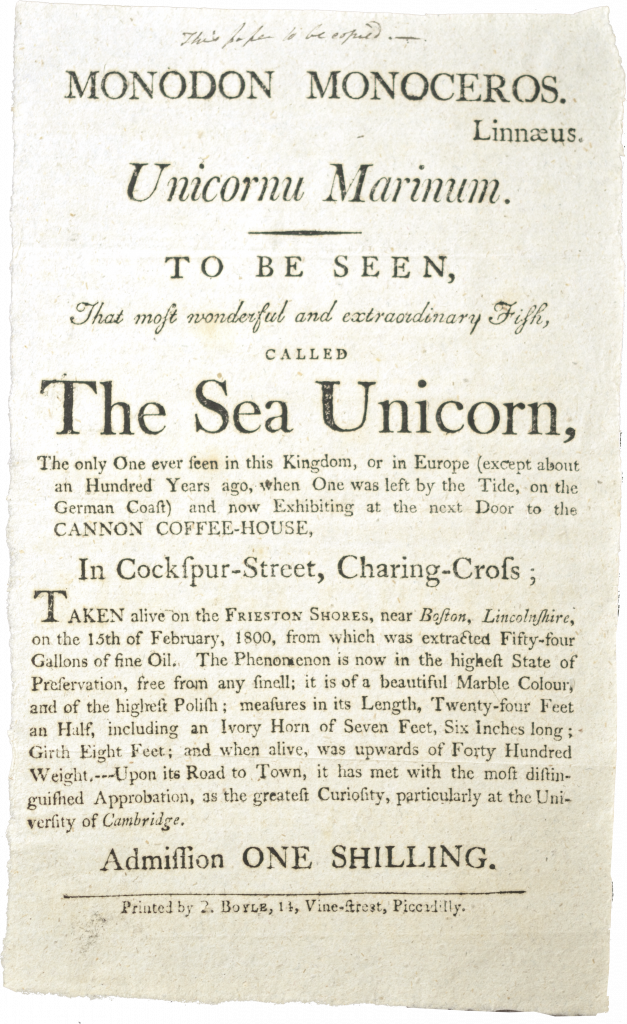 It was once widely believed that helically grooved ‘horns’ in early museum collections belonged to the mythical unicorn. Eventually they were identified as the tusk of the male narwhal, a whale living in Arctic waters. This tooth can grow up to three metres long and its natural spiral shape influenced the way that unicorn horns have been depicted from medieval times.

These tusks were rare finds, occasionally brought back by mariners from northern lands. They were highly valued and reputed to neutralise any poison if ground up and put in liquid. Queen Elizabeth 1st paid the equivalent of a third of a million pounds for a single horn.

Albertus Magnus describeth one ten foot long, and at the base about thirteen inches compass. And that of Antwerp is not much inferior to it; which best agree unto the descriptions of Sea-Unicorns; for these are of that strength and bigness, as able to penetrate the ribs of ships. 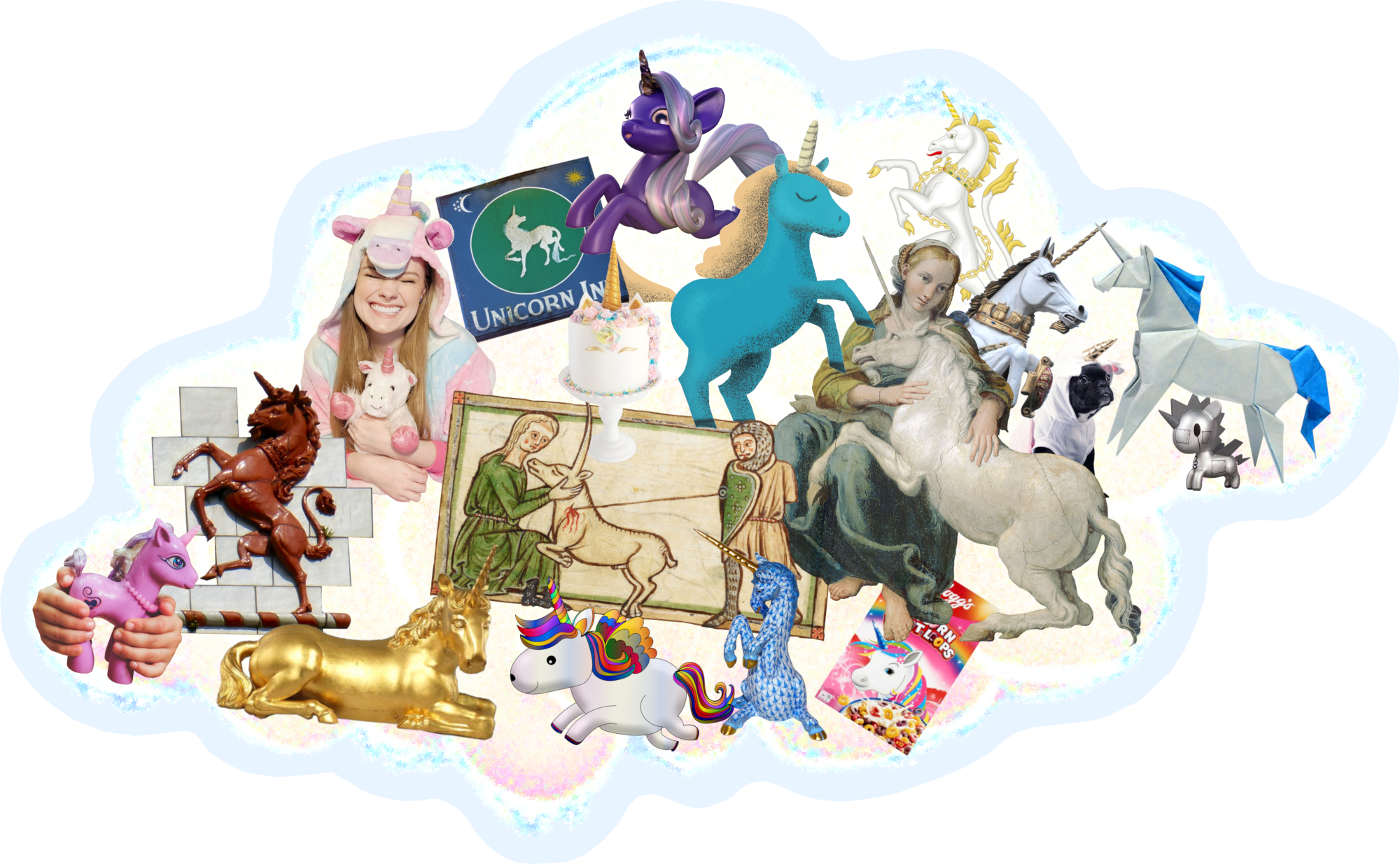 The unicorn is no longer the shy, magical creature of the deep forest but has now been put to work selling anything vaguely glittery, shiny or colourful — in fact anything that can be
‘unicornified’. 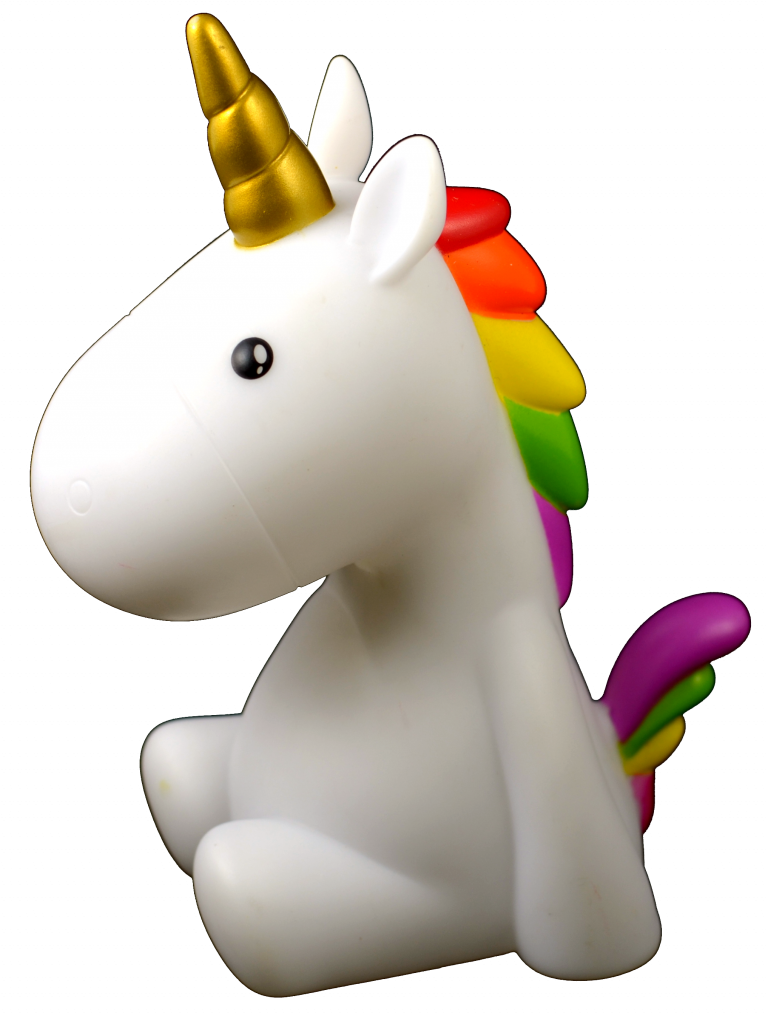 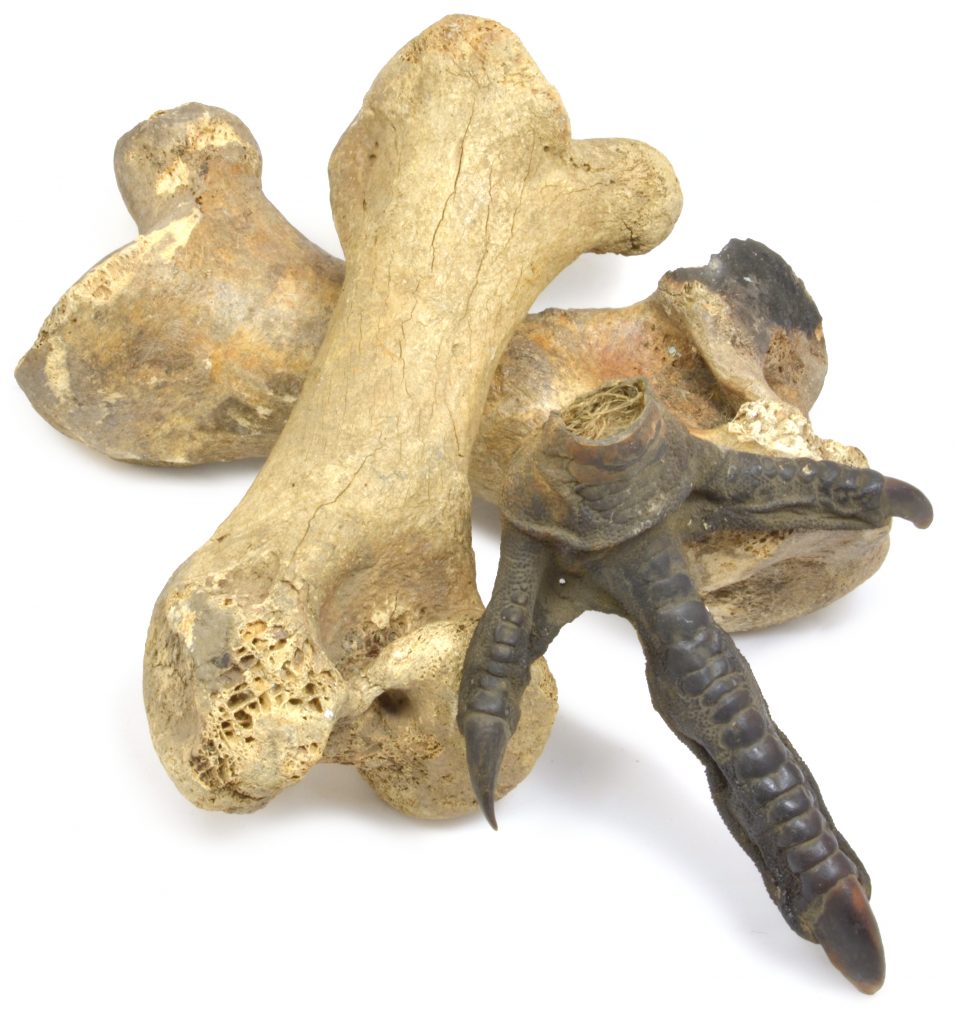 Femurs of moa (Dinornis sp.) and the dried foot of an emu (Dromaius novaehollandiae)

Richard Owen, Victorian palaeontologist and first superintendent of the Natural History Museum, examined a small bone fragment sent from New Zealand and predicted it belonged to a flightless bird far larger than any known to be living now. He named it Dinornis, meaning ‘terrible bird’, and was able to reconstruct a full skeleton after receiving more bones a few years later. 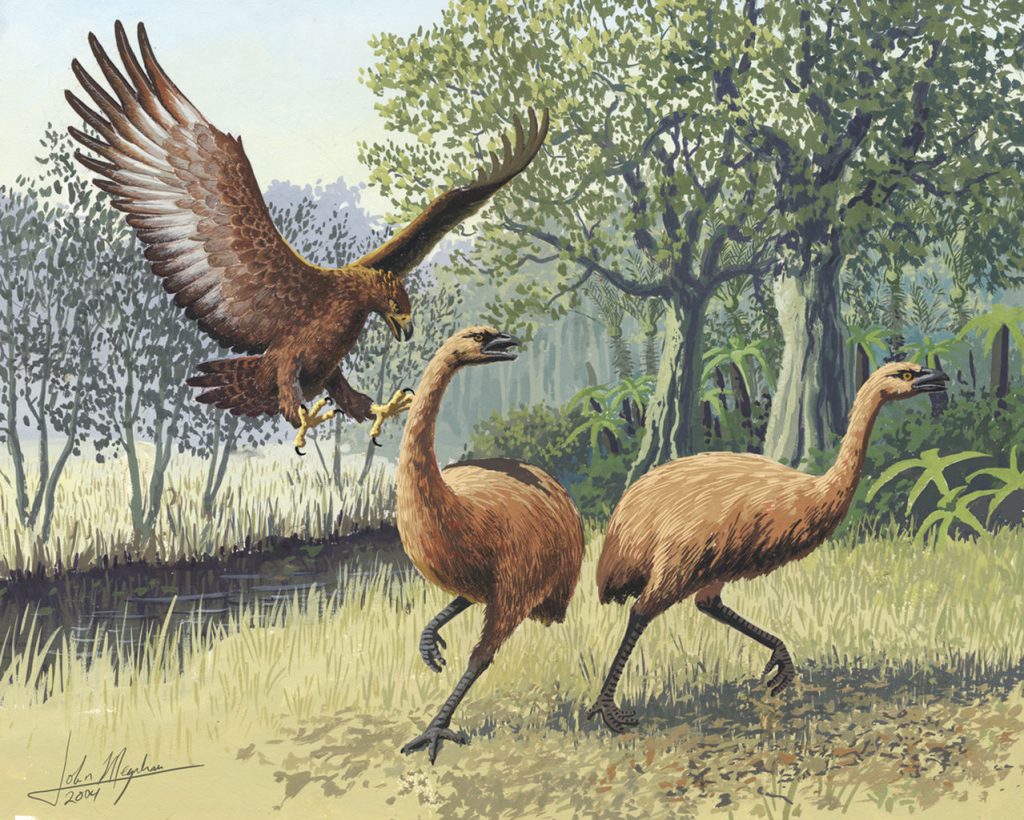 The moa were giant wingless birds living in the forests of New Zealand. They became extinct around 1400CE through overhunting after the arrival of the Polynesian settlers. Prior to the arrival of humans the moas only predator was the massive Haast’s eagle, larger than today’s most powerful living eagles. 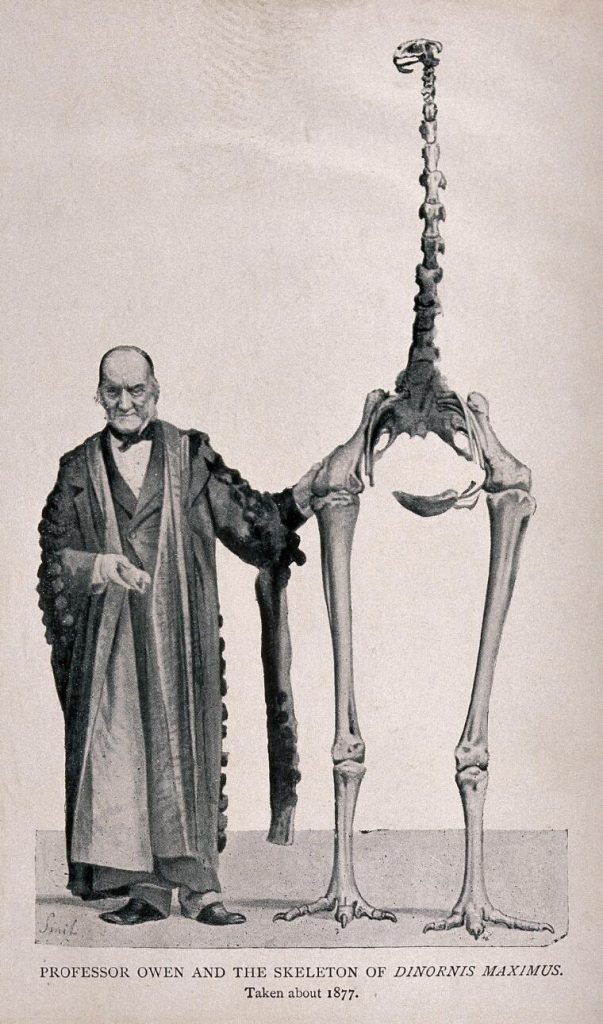 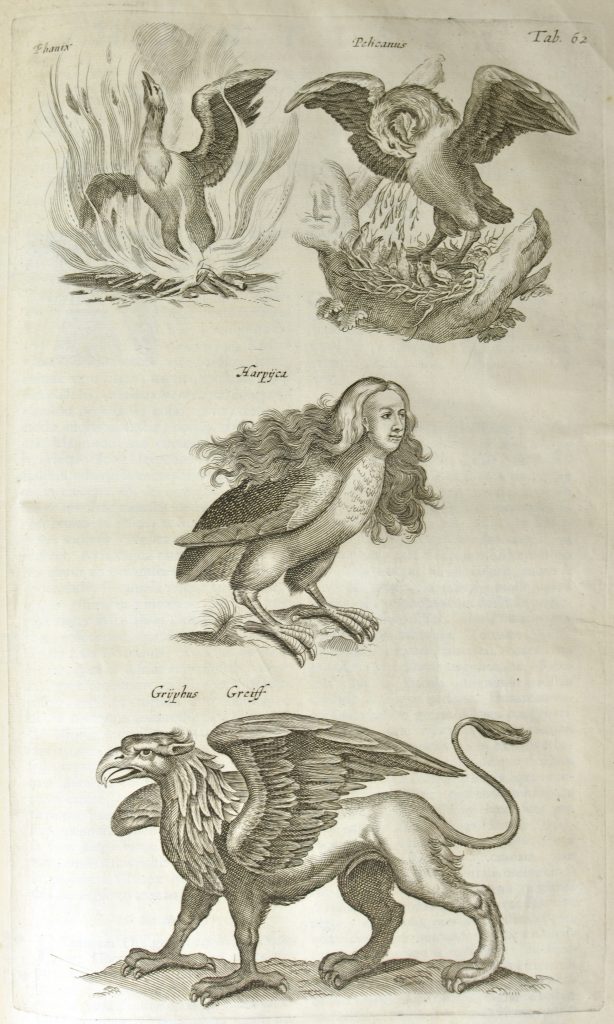 Mythical birds from ‘Historiae naturalis de avibus libri’ by Joannes Jonstonus with engravings by Mathias Merian published in parts between 1657 and 1660.

The phoenix, that famous bird of Arabia; though I am not quite sure that its existence is not all a fable. It is said that there is only one in existence in the whole world, and that that one has not been seen very often.We are told that this bird is of the size of an eagle, and has a brilliant golden plumage around the neck. 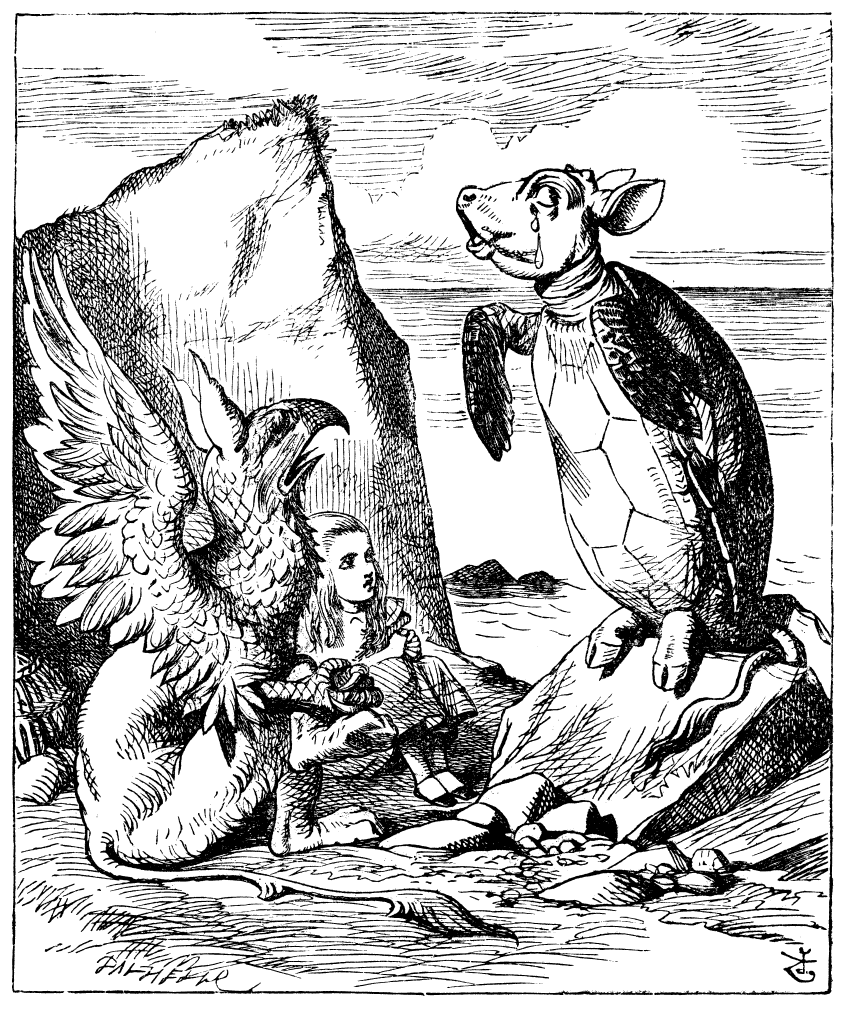 Alice did not quite like the look of the creature…

Alice was wise to be cautious as the griffin was known to be a fearsome, predatory beast. 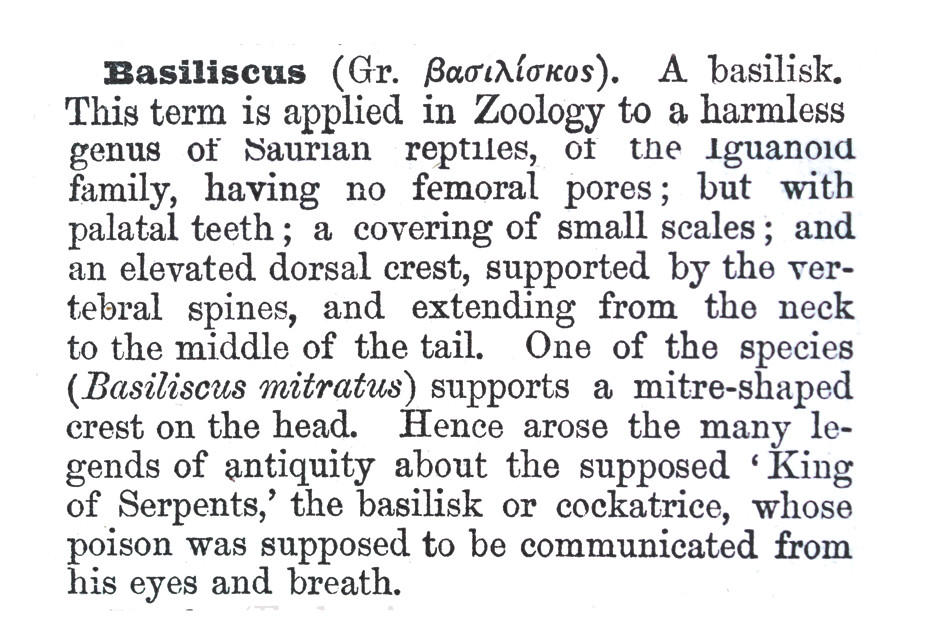 The basilisk, or cockatrice, was believed to hatch from a snake’s egg and has long been an object of complete terror.

Its touch, breath and particularly its malevolent gaze were thought to be lethal. Such was the strength of its poison it could flow up a weapon and destroy the bearer. Travellers were advised to carry a mirror and a weasel for their protection. In later times it acquired the body parts of a rooster. 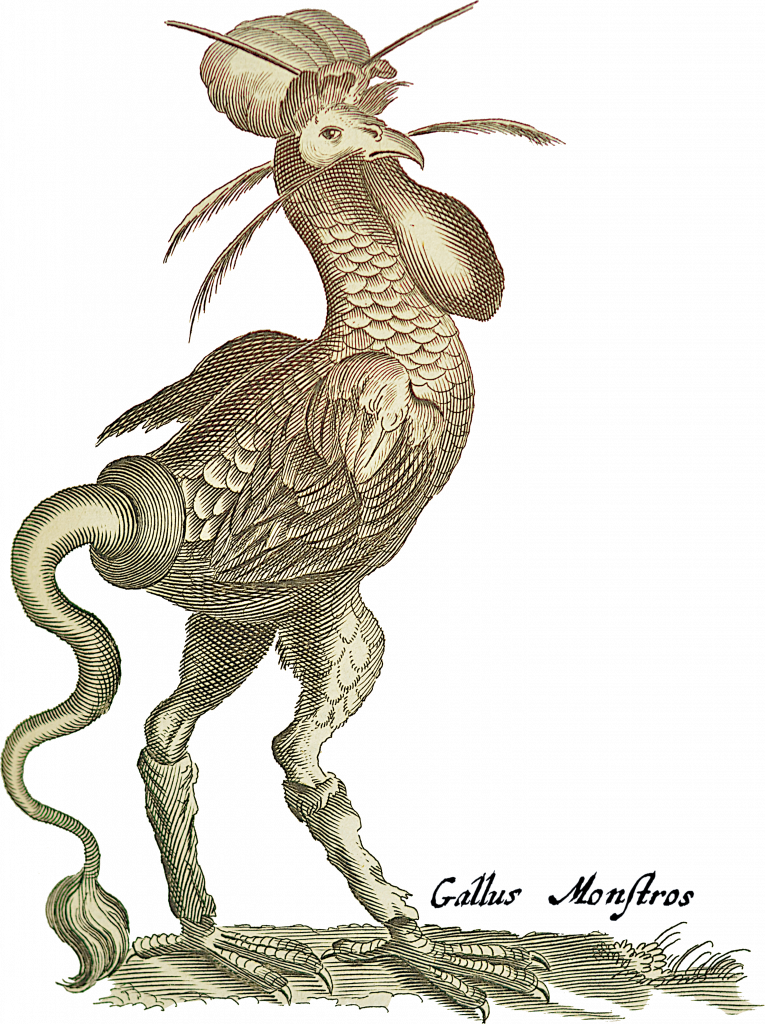 Cockatrice from ‘Historiae naturalis de avibus libri’ by Joannes Jonstonus with engravings by Mathias Merian published in parts between 1657 and 1660. 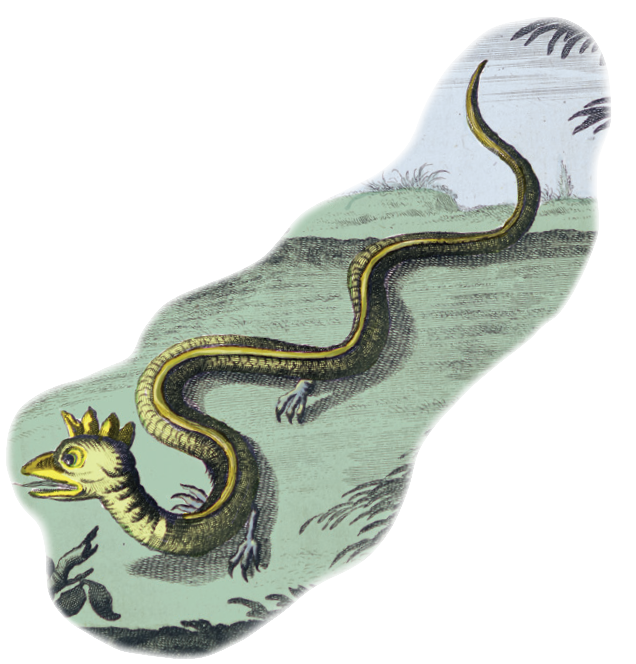 It is gross in Body, of fiery Eyes and sharp Head, on which it wears a Crest, like a Cock’s Comb. Its poison infects the Air so that no Animal can live near it. They are bred in the Solitudes of Africa. It does not, like other Serpents, creep on Earth. 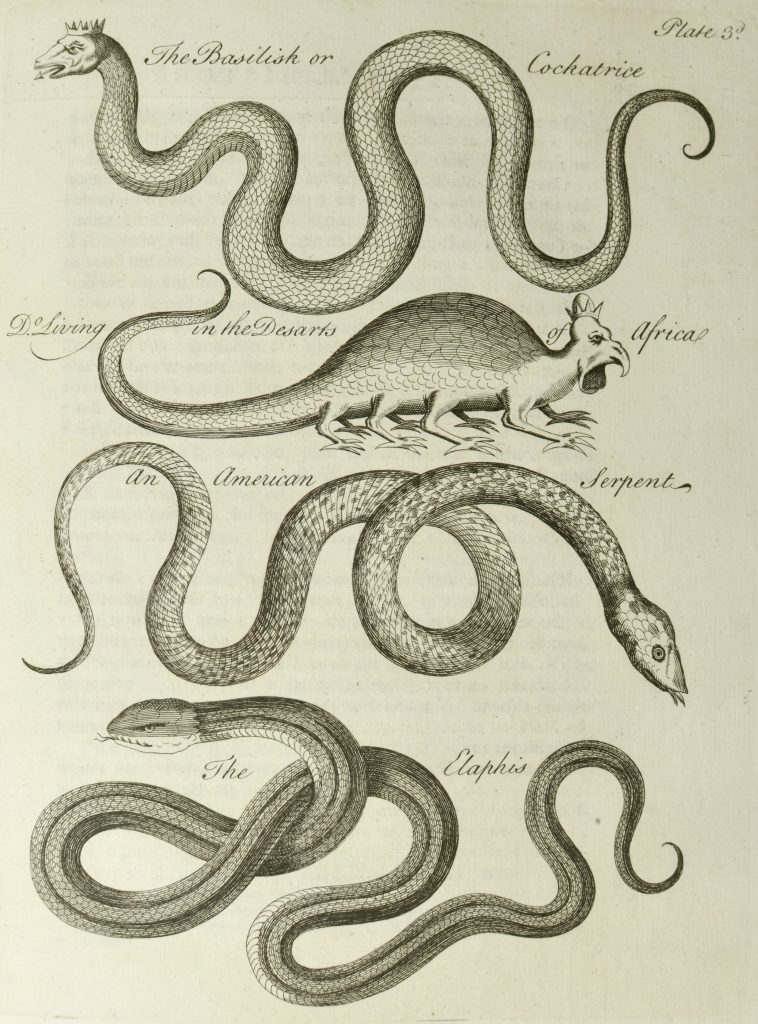