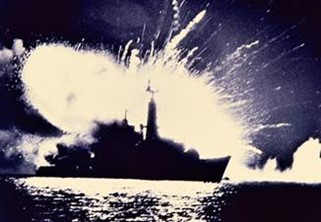 In the Falklands conflict in 1982 Nicholas Tobin was captain of HMS ANTELOPE when it was hit by an Argentinian bomb and later sank. In his upcoming talk, Captain Tobin will recount the ups and downs of his ship’s unique involvement in the campaign to recover the Falkland Islands in 1982 and what happened to him and his ship’s company after their return to England when an inquiry was set up to investigate the loss of his command in action. Nicknamed the ‘Ping Pong Ball’ by the Task Force’s Flag Ship, HMS ANTELOPE assumed command of a large group of amphibious ships for most of their passage to southern latitudes. Nick was also responsible for the safe transportation to Ascension Island of not only 180 Argentine Prisoners of War captured when British forces retook South Georgia in Late April but also the British Antarctic Survey Team, two female wildlife documentary filmmakers from Anglia TV and two South Georgian pintail ducks!

Nick Tobin joined the Royal Navy in 1962 first serving in the minesweeper HMS Glasserton after graduating from Britannia Royal Naval College, Dartmouth.  He then trained as a Fighter Controller and served in this capacity in the aircraft carrier HMS Victorious and the destroyer HMS Aisne from 1964 to 1968.  Next, having specialised in air warfare, he served in the guided missile destroyer HMS London in 1970 and then ashore in HMS Dryad and the Admiralty Surface Weapons Establishment where he developed military data links in both national and NATO fora until 1974.  Consecutive commands of the patrol crafts (converted ‘Coastal’ minesweepers) HM Ships Beachampton and Wolverton in Hong Kong and its surrounding waters kept him busy until 1976 when he returned to the United Kingdom to undergo staff training before another sea appointment in the aircraft carrier HMS Ark Royal.  Promoted to Commander in 1978 he taught at the Royal Naval Staff College at Greenwich as a member of the Directing Staff.

Nick assumed command of the frigate HMS Antelope in early 1981 and, during the campaign to recover the Falklands after the Argentine invaded the islands in 1982, his ship was bombed and later sank in San Carlos Water on 24 May. On his return from the South Atlantic, he served first in the Naval Staff and then as the Military Assistant to the Vice Chief of Defence Staff in the Ministry of Defence. Following his promotion to Captain in 1986, he was accredited to Japan as the Defence and Naval Attaché, based in the British Embassy in Tokyo.  Returning to London in 1990, he headed the Warfare Branch Development Team where he masterminded a major shift in the way the Royal Navy trained and employed its service personnel.  In 1994, following 18 months as the Director of Naval Manning and Training (Seaman), he was selected to set up and head the key Directorate of Naval Manning in London and Portsmouth.

Nick retired from 34 stimulating years in the Royal Navy in early 1996 aged 51. Currently, he chairs his local residents’ association, represents Bath residents on the City’s World Heritage Site Advisory Board and various other voluntary organisations.

Nick was brought up and educated in Kenya.  His wife Jose died in March 2019. He lives in Bath and has a daughter, Naomi, who – maintaining the maritime tradition – designs the interiors of super yachts. Nicks fascinating talk takes you through a key moment in 20th century British history. Don’t forget to book, and links are provided below.